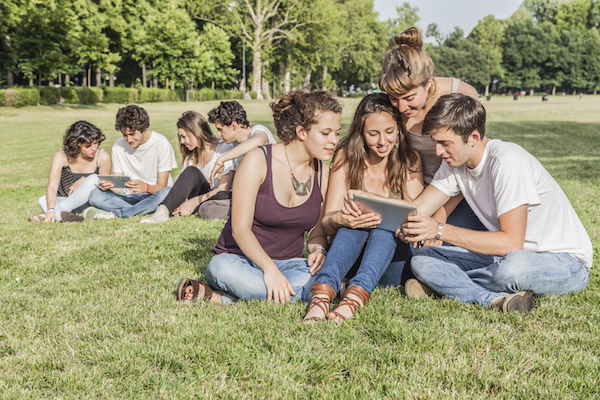 For the majority of my time in high school I had one group of friends who I hung out with.

The group was me and four other guys I got along with pretty well. I knew a lot of other people of course, but these were the guys I called up on Friday night and who I regularly went skateboarding with after school.

Having more than one group of friends you hang out with is important. And here’s why it was important for me not to get stuck with one group:

1. I couldn’t ‘experiment’ with my personality.

I felt a lot of social pressure in high school. I spent a good deal of time worrying about what other people thought of me. I felt awkward telling people I had a different opinion than they did or suggesting ideas about things we could do, and I even felt strange wearing new kinds of clothes!

Part of the reason I was so nervous was because I thought that people liked me enough and risking that would be terrible because they might not like the “new” me. If I changed and all my friends rejected me, I’d just have committed social suicide! (In high school I was really scared of this.)

When I met a new group of friends, however, the pressure went down a bit and I became more open to acting differently and expressing myself freely. I knew that if my opinion was looked down upon by one group of friends, I still had other people I was close to who wouldn’t know or care. Once I felt more comfortable opening up, every aspect of my social life got better!

2. I was less likely to call a friend out.

Sometimes your friends will cross the line. If you’re part of a small, close-knit group and someone does something rude to you, you’re more likely to let it pass than say something and risk rocking the boat.

That’s a pretty unhealthy situation to be in. I was there, however, so I know it happens. Even when one friend does something wrong it’s hard to speak up because everyone you’re close to is directly linked to that person!

Once again, having another group to rely on makes it less scary to stand up for yourself. If you don’t set limits early on, your friends may start to take it for granted that you’re a bit of a pushover. In the long run, you’ll gain more respect from them and build a better relationship if you have the courage to say “no” early on.

It’s likely that you and your closest group of friends are into similar things. I remember when everyone I knew picked up the yo-yo. In my sophomore year, all my friends bought long boards and we skated around almost every day after school.

This was great, but it didn’t provide a lot of variety. After a few months it was a little “same old same old.” That all changed when I met another group of friends.

These friends loved going on road trips to San Francisco and camping in Big Sur on the California coast. As soon as I met them, I began joining in on a million new activities that I would never would have done with my first friend group. Meeting new people launched me into an entirely different life!

Having a “main” friend group is awesome. Having people you’re tight with and who you know are ready to kick it any day of the week is part of what makes the stress of high school much more bearable. That said, don’t be afraid to take a chance and try something new! (Hint: Check out others with your interests on meetup.com)

[Looking for more info from The TeenLife Experts? Use our 3 tools to fight peer pressure!]