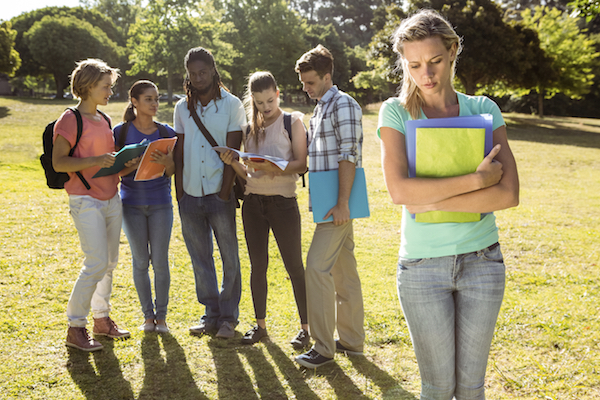 Learning how to deal with peer pressure is an important part of growing up. It’s a skill that is vital to living a comfortable life as an adult where you have to stand up to colleagues, friends, even politicians.

That’s why it’s important that you learn how to deal with peer pressure now. Here are a few tips that have helped me overcome a lot of the difficulties around it.

1. Realize that giving into peer pressure is uncool.

Only do something if you personally think it’s a good idea. Sometimes it’s OK to be influenced by friends if you see that they’re right, but you only do something that you know might be worth a risk. For example, it might be OK to listen to friends who are trying to convince you to join a sports team if you think that it would be fun and that the exercise would be good for you.

When you really don’t want to do something but are convinced to do it, your friends will begin to think that you’re not really very strong or confident. Confident and collected people can’t be peer-pressured at all. They’re the ones who are cool.

2. Have more than one friend group.

If you’re close friends with only four people and all of them are trying to convince you to do something, you’re likely to do it even if it’s dangerous. This is because saying “no” means running the risk of appearing uncool in front of everyone you are emotionally invested with. That’s a massive social risk!

By having two or more groups of friends who don’t really know each other, you make the risk of appearing uncool a whole lot less scary. If one group thinks you’re a wimp it doesn’t matter as much because you’ve got other people who think you are awesome.

3. Try to think of the long-term picture.

A lot of the stress you feel when under peer pressure comes from FOMO, or the fear of missing out. Here’s a “once in a lifetime” situation to prove how cool you are, and you think that if you don’t take it, you’ll probably never have it again. This, of course, makes you more inclined to say “yes” to something you otherwise would avoid.

I remember how stressful it was when a friend would say, “Come on man, let’s do it!” It feels like everything is coming down to this few seconds that will make or break your entire social life. When this happens, try to think of the big picture. Think about your life in a year, or five years. If the situation you’re in feels too risky, get out of it. In the long run, it won’t have a big effect on your life if you leave. But, if things go wrong, staying could really mess up your life!

[Want more tips from the TeenLife Experts? Here's how to say goodbye to a friend who is a bad influence.]