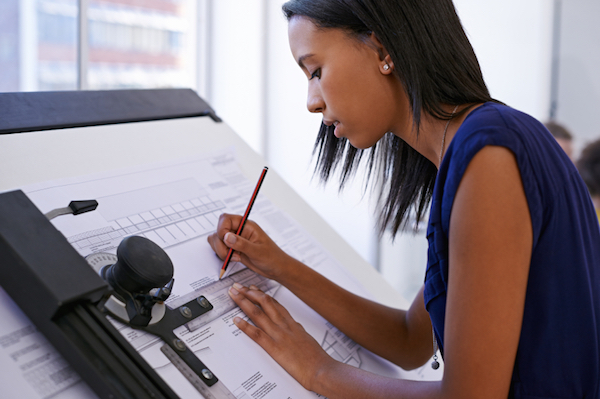 Girls interested in STEM (science, technology, engineering and math) often face an uphill battle, and need all the support they can get to foster their curiosity, which is why positive role models are essential. However, perhaps we are barking up the wrong tree when we assume that they will be inspired by women who are both glamorous and successful in STEM?

The Distorted View of STEM

It’s no secret that impressionable young girls have a seriously distorted view of STEM-related careers, often perceiving them as male-only professions, or just for dowdy, unfeminine women. These stereotypical views are widespread and have a detrimental effect on getting girls interested in science and math at school, and subsequently entering a STEM-related career.

It is therefore no surprise that as a society wishing to overturn this, we often try to overcompensate by showing a glamorous side to STEM. However, research undertaken by Diane E Betz and Denise Sekaquaptewa for the University of Michigan, seems to indicate that attractive and feminine STEM role models may actually demotivate young girls, even those that had already shown aptitude or interest in related subjects.

The study shows that feminine role models actually decreased the interest in math in both the girls classed as “STEM-identified” (those that had previously indicated they enjoyed math or science), and also had a negative impact on the opinion of the girls who didn’t like math or science.

For girls disinterested in science and math, the problem seems to arise from their inability to equate feminine women to successful STEM careers; they’re just not buying into the likelihood that you can be both feminine and achieve success in STEM.

Additionally, the studies showed that the girls who had voiced an interest in science and math were also demotivated by attractive, successful women in STEM; they perceived that being beautiful and doing well in STEM is hard to emulate, causing doubt in their own abilities.

The bottom line seems to be that when success is perceived as unobtainable, girls are more likely to feel threatened than inspired, and that better results all round are achieved when a more everyday female role model is involved.

So, given that we need to take care about not over-glamorizing women in STEM, it seems that the most powerful role models are women who have shown determination to succeed, and have been triumphant against the face of adversity. Young girls need to know it is possible to do well in a male-driven environment, and their confidence in their own abilities are boosted when they see successful females in all stages of life, including school, college and work. The simple truth is that every woman holding down a job within a STEM-related subject is a role model, and this is the important message we should be sending; whether they wear lipstick or have their nails manicured is simply irrelevant.

Parents are also an incredibly vital influence on their kid’s perceptions and choices; if you are a mom that is petrified of math and science, no prizes for guessing how your daughter is going to view the subjects.

Additionally, the helicopter style of parenting many teens face today is also a set-back for girls possibly interested in STEM. Learning about, and being involved in science and engineering, is not always easy, often trial and error, both at school and as a profession. It takes perseverance and dedication, with an acceptance that failure is invariably part and parcel of the job.

However, when kids have been wrapped up in cotton wool, they may find it incredibly difficult to face adversity in whatever they try in life (STEM related, or not), often giving up as soon as the going gets tough, which further sets back female success in STEM.

Successful role models for girls in STEM have to be real, and tell it like it is. They need to be accessible and someone girls can relate to, showing that absolutely anyone can have a career in STEM if they put in the hard work.