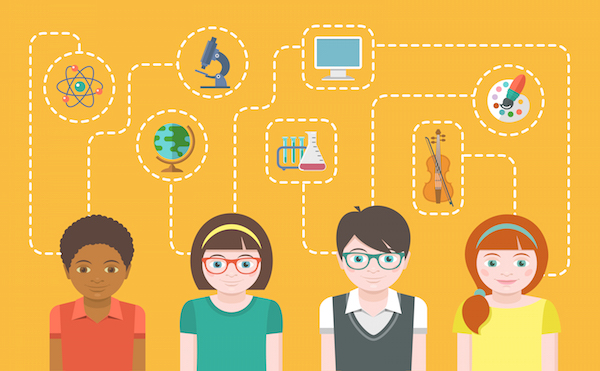 Several years ago, in a dim coffee shop, I was trying to explain Coulomb’s law of electrostatic interaction to a fellow poet. He couldn’t understand my fascination with physics, so I tried to explain it to him using the language we shared: poetry.

The result was a series of poems based on physics concepts: Coulomb’s law, Total Energy, and even Einstein’s quantum theory. Scientific language was rich with metaphors and images that helped expand my poetry, and as I wrote, I deepened my understanding of the principles of physics as well. And for him, finally couched in a love poem, Coulomb’s law made sense.

My fellow poet and I are not unusual. Students need a language that allows insight into difficult concepts. Traditionally, science, technology, engineering, and math (STEM) programming sought to break down what teachers saw as some artificial barriers created between those disciplines that undermined student performance.

I am a great example of that: At some point in puberty, as many other girls do, I decided I was bad at math. In high school, I found myself performing poorly in calculus, while earning straight A’s in chemistry and physics, often using the very formulas I couldn’t apply in my calculus class. The language of physics and chemistry made sense to me in a way that the language of calculus didn’t. When we break down the academic barriers between these disciplines, it becomes easier for students to see and create connections and understand what they are learning. Unfortunately, one false barrier remains: that between STEM and the arts.

Why adding arts is beneficial

Research is now showing that embracing art and expanding STEM to STEAM can reach students in unexpected ways - especially those who don’t understand STEM or think they are bad at math and science.

Arts disciplines, such as English, creative design, or humanities, give us a new vision or language to approach science and math. For those who excel at STEM, being encouraged to communicate and explain scientific principles through the arts helps to expand their understanding of being a scientist while exhibiting the highest level of learning: explaining it to others. In a recent piece called “Creative Expression of Science through Poetry and Other Media can Enrich Medical and Science Education,” author Sherry-Ann Brown cited several examples of the high level of learning transfer required when students apply learning to creative expression.

Other benefits of arts in STEM

There are, of course, other benefits, including a serious infusion of creativity into STEM. Our most successful cultural examples of design include a respect for and understanding of arts and humanities.

For example, the sleek design and functionality of Apple products are not just about electrical engineering, but about psychology, sociology, and an awareness of art. Further, the discomfort associated with true scientific inquiry, what scientist and educator Stuart Firestein called “farting around in the dark,” is enhanced when students understand inquiry as a fundamental quality of human nature. The arts remind us, through literature, music, or visual arts, that meaning often comes from a perpetual searching.