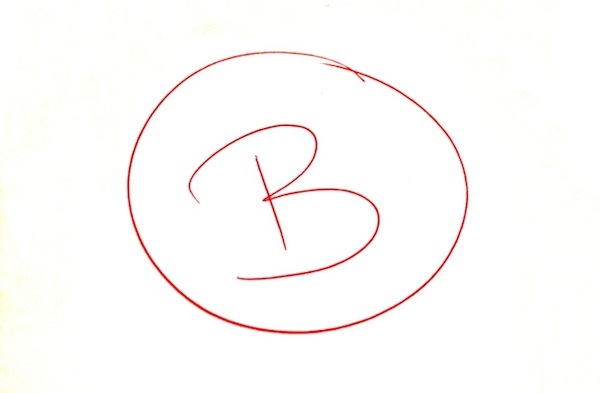 Listening to the mainstream media, one might conclude that getting into college has never been a more competitive or harrowing venture. With the exception of a scattering of hyper-selective prestigious schools across the country, this notion could not be further from reality. In truth, today’s college marketplace greatly favors you, the buyer, more than ever before.

For proof, let’s examine some basic stats. In 2012, 63% of high school graduates in the United States enrolled in 4-year undergraduate institutions; 75% from that pool report that they were accepted to their first choice college. You don’t have to be Fibonacci to figure out that all of those students were not in the top 10% of their graduating classes or even the top 50%. The vast majority of the students that roam university campuses were “B” students in high school, and many go on to great success in life.

What type of B student are you?

Students who earned Bs while engaged in a rigorous course load will obviously have an admissions edge over those who took the high school equivalent of Rashad McCants’ schedule at The University of North Carolina. Likewise, a B student with a 1450 SAT score will have different postsecondary options than someone who spent the majority of the test guessing C for every question. The good news is, no matter what type of B student you are, many excellent schools are looking for students just like you.

Why some colleges seek B students

We’re not going to argue that a B student is superior to an A student. The oft repeated, tongue-and-cheek adage that “A students teach B students to work for C students” is probably a bit overstated simply for its shock value.

Yet there are some desirable personality traits that are sometimes more prevalent outside the top of a given high school class. B students are sometimes less set in their ways, more intellectually malleable, and willing to take risks. It’s not uncommon to hear professors report that they enjoy working with B students because they are less anxious and tend to work better collaboratively than straight-A students.

Note: Again, we’re not suggesting there is anything inherently better about people who get lesser grades. There are certainly plenty of A students out there who also have all of the aforementioned winning personality traits.

College Transitions recently published a list of Excellent Colleges for B Students. These include:

Colleges featured in this list accept many students with good (but not great) credentials and possess better-than-predicted outcomes in the areas of retention, degree completion, graduate school admission and postgraduate employment. Fortunately, many of these schools also offer generous financial aid packages to their students.

College Transitions’ Bottom Line: Today’s postsecondary landscape is a bountiful world for the B student who remains motivated and stays focused on the bigger picture of the college search and admission process.