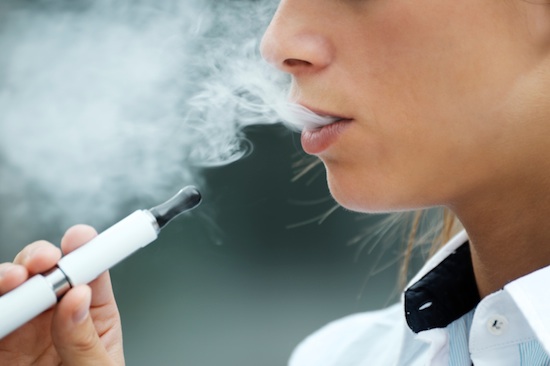 Parents, have you heard of vaping? It's such a new word that every time I type it, the autocorrect feature on my MacBook changes it to "gaping." If you haven't heard of vaping, read on, because this explosive trend is catching on with teens right under the noses of unsuspecting adults.

Vaping is the trendy term for using an electronic cigarette. Here's a quick overview for clueless parents and nonsmokers like me: Instead of inhaling smoke, users inhale vapor from their e-cigarette cartridge. E-cigarettes contain liquid nicotine and flavoring to make the vapor more appealing. This liquid (also called vape juice, e-juice and e-liquid) heats up inside the cartridge to produce vapor.

The popularity of e-cigarettes has taken flight in a big way — according to Bloomberg Businessweek, sales will double this year to reach $3 billion. People are intrigued by the novelty of a cigarette that doesn't contain tar-filled smoke — you get your nicotine hit via vapor, and you can blow smoke rings, too (just search "vaping smoke rings" on YouTube and you'll see thousands of examples).

E-cigarettes are marketed as a healthier alternative to regular smoking and touted as the newest smoking cessation tool by many celebrities (did you catch the celebs flaunting their e-cigs at the recent Golden Globe awards?). And unless you're in a city that has imposed smoking bans on e-cigarettes in offices and restaurants (like New York City), you can vape wherever, whenever.

The e-cigarette industry has quickly developed a slew of e-cigarette products that appeal to teens: E-pens, vape pens, e-Hookahs, and hookah pens are some of the more popular nicknames. The bright, iPod-like colors of these devices are enticing to teens; you even plug in and re-charge them just like other tech gadgets. And e-liquid comes in fun flavors like bubble gum, chocolate and watermelon — all available online.

Readily available, cool, tech-like…and unregulated by the U.S. Government. Unlike the tobacco industry and even nicotine gums and patches, there is no national legislation regarding the marketing and selling of e-cigarettes and their ingredients. And liquid nicotine can be bought and sold over the Internet without much oversight. Just one tablespoon of liquid nicotine, at high concentrations, can kill an adult, according to a recent article in The New York Times.

In today's New York Times editorial page, the American Academy of Pediatrics is urging the FDA to step up, take action, and regulate these products. To date, no progress has been made.

Yes, teens can buy disposable e-Hookahs that are advertised as nicotine-free online ("800 puffs powered by a lithium battery. You don't have to recharge!"). But because these products are unregulated, manufacturers don't have to list ingredients on their packaging; health experts warn that there's no way of knowing what you're inhaling and whether it's really nicotine-free or just tobacco-free (the terms are used interchangeably in many online descriptions).

What Should Parents Do?

So what's a worried parent to do? It may sound trite, but talking to your middle or high school child about the dangers of vaping and nicotine is your best defense. Until the U.S. Government and the FDA issue guidelines for regulating e-cigarettes, it's up to parents to educate themselves and their children. Experts suggest opening a dialogue with your teens. Make sure that your teen knows that a vape pen is just another name for an e-cigarette, and that no matter what the name, these devices can deliver powerful hits of a very addictive drug: Nicotine.

Don't leave it up to the e-cigarette marketers and celebrities to educate your children about this so-called "healthier" alternative to smoking.

Why You Don't Have to Put Up with Cigarette Companies Targeting Your Kids, Commensense Media