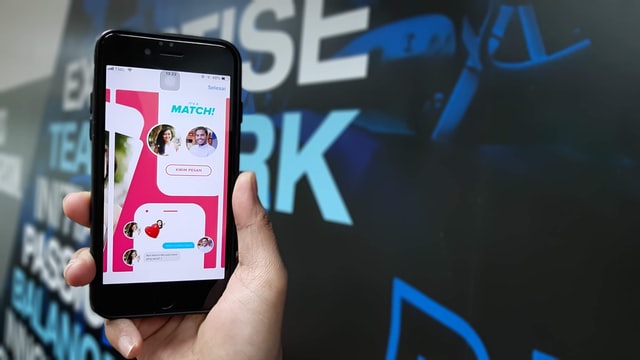 When the editor at TeenLife suggested I do some research on teens and Tinder, my first thought was that she was talking about a Ke$ha song (that song turns out to be “Timber,” thus proving once again I am not as in the know as I think I am.) Once I did a little research, my second thought was, “Why would a teen use this app?” Teens have tons of places to find other teens to date and socialize with—school, sports, clubs, religious organizations, work, etc. I could not understand the allure of an app like this.

Rosette Pambakian, VP of Communications & Brand Partnerships at Tinder explained, “Tinder is not a dating website. It is a social discovery platform.”

Users download the app and log in through Facebook. A user’s first name, age, profile picture, interests and bio are pulled from their Facebook page. Users then select whether they want to see profiles of males or females, their age range and relative distance from them. Pambakain points out, “We do not get more granular than one mile so a user’s exact location will never be known.”

Tinder then browses through profiles to find users they think would be interested in one another. A user swipes right to “like” or left to “nope.” If both people swipe right on each other it results in a match and they can begin chatting within the app.

Tinder is a free app and users need to have a Facebook account. As with Facebook, the minimum age requirement to set up a Tinder account is 13. As a safety precaution, users age 13-17 can only connect with other users in this age range. In addition, Pambakian says, “Users are able to quickly and easily report and block anyone that engages in offensive or inappropriate behavior on Tinder. We monitor and delete any profile that violates our terms of use.” Tinder also requires a double “opt-in” meaning both users need to “like” each other before they can communicate. Tinder estimates 13-17 year olds only make up 7% of their user base.

Some have compared Tinder to the old Hot or Not website. Judging a person on appearance alone seems superficial and not the best way to meet someone. But Pambakian argues, “Tinder emulates human interaction. When you walk into a room, the first thing you notice about someone is their physical appearance. Once you engage in conversation you look for commonalities such as mutual friends and common interests to help establish trust between two people. The Tinder experience is built the same way except it's more efficient since we show you what you have in common with other users.”

Why Are Teens Using Tinder?

While I was surprised that teens would use Tinder, the company is not. Pambakian says, “Tinder is a great way to meet new friends.

Essentially all we are doing is facilitating an introduction between two people who are interested in getting to know each other better. It’s up to them to use it for making friends or if they are just looking to see who is around them.”

With such a huge in person dating field (school, sports, etc.), why would teens choose to meet someone online? Many teens seem to like the anonymity and the concept of hooking up or dating someone that they would not have to see on a daily basis.

Shannon*, a 19 year-old college sophomore has a Tinder account. Shannon explained, “My friends set it up, but I never really use it. I do occasionally look at the profiles and ‘swipe’ on the cute guys, but I have never met any of them in person.”

Shannon let me look at some of the profiles Tinder had suggested to her. I was surprised to see some of the guys were in their late 20’s but since she is 19, she does not have any age restrictions. After a few in ‘like swipes’, several of the guys initiated conversations with her. Their comments ranged from clever to sweet and kind of corny to shockingly vulgar—especially for an introduction. Shannon did not respond to any of the messages and did not plan to.

But there are some teens that are meeting up with the people they connect with on Tinder. Ashley is 18 and met her current boyfriend through the site. The two have been dating for a little over a month. Ashley says, “It’s just a summer fling, but it’s been fun. I spent my summer working and wouldn’t have met someone otherwise.”

In general, parents need to know what sites and apps their teens are using, who they are talking to and how they are representing themselves. Be wary that a person that sounds too good to be true online probably is. Setting up a fake Tinder account is fairly easy. In fact, this past July, Conan O’Brien and Dave Franco did a video where they created fake Tinder accounts and went to meet their real-life matches.

Although O’Brien’s skit was a comedic, the danger of being matched with someone who is not who they say they are on Tinder is very real. Predators can set up fake accounts to avoid the age restrictions and connect with younger teens.

There are also teen boys who set up accounts with much older ages in hopes of hooking up with older women. Connie*, a divorced mother of three says, “I decided to try Tinder in hopes that I might meet someone locally that I would be interested in dating. Instead, I had several matches of teen boys with ‘cougar complexes’ that want to ‘get with’ an older woman. Their ages did not match their profile pictures so I dismissed them immediately. For those of us really interested in finding someone, it is frustrating that the site is not policed for misrepresentation.”

Teens need to remember that people they meet online are strangers—regardless of what they already know about each other—and should proceed with caution, especially when choosing to meet an online connection in person. Teens tend to be bolder with their words online than in person and over share information. This can result in miscommunications and hurt feelings. Parents need to remind their teen that there is another person on the other end of the screen with feelings, too.