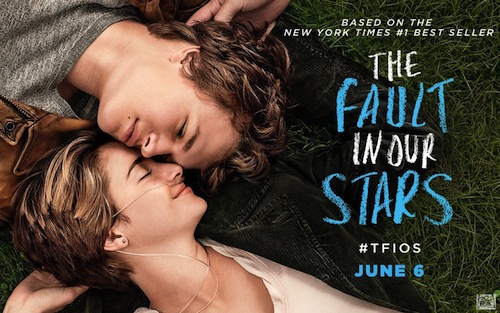 like X-Men, Spiderman or the sequel to 21 Jump Street come to mind. But will a movie about teens living with cancer draw this summer’s moviegoers?

The Fault In Our Stars (or as fans call it TFIOS) arrived in theaters Friday June 6th as one of the most widely anticipated movies of the summer. Based on the book of the same name by John Green, TFIOS tells the love story of Hazel and Augustus (Gus), two teens living with cancer.

Hazel and Augustus meet at a cancer support group. Hazel has thyroid cancer that has spread to her lungs so she needs daily oxygen. Gus had bone cancer and had his leg amputated but is in remission. The two become friends discussing many things, including their favorite books. An organization that grants wishes to sick children gives Gus the opportunity to take Hazel to meet the author of her favorite book in Amsterdam. While the author turns out not to have the answers Hazel was looking for, the two fall in love on the trip. When they get home, Gus tells Hazel his cancer has returned.

With such a depressing topic—why did the book resonate so much with teen readers and will the movie do the same?

According to the teens I spoke with, it is Green’s writing style that draws the reader in. Says Rachel L., 19, “The author doesn’t create dumb teenagers. Hazel and Gus seem like kids you would know and even though they have cancer, they are not overly wise and prolific—they are real and honest.” In an interview with Rookie magazine, Green said, “I don’t think adults give teenagers enough credit as intellectually engaged people.”

Some have compared the characters of Hazel and Gus to a modern day Romeo and Juliet—both couples desperately in love but destined not to have a happily ever after. This may be part of the reason teens have been so drawn to the story. Says Jenny M., “Knowing that their time together is short makes the fact that they are so in love more understandable. Most teens would not fall in love that hard, but you believe that these two would because of their dire circumstances and that's what makes it so romantic.”

The Voice of Teens

The book is written from Hazel’s point of view. It is interesting that Green, a man in his 30’s, is able to capture the voice of a teenage girl so well. While discussing the book, several teens mentioned their favorite quote, “As he read, I fell in love the way you fall asleep: slowly, and then all at once”, reciting it verbatim and in unison. Clearly, Green knows how to describe what it is like to fall in love in a way teens can relate to. Green admits in the same interview that his characters don’t really talk like typical teenagers, but instead, like the way teens “want to think they talk.” Teens say that while book is sad, it is also funny and romantic.

The appeal of the Hazel and Gus story has reached beyond the teen reader. Many young adults including my own daughter have urged their parents to read the book. Debbie P., a mother of two teens read the book and says, “I was curious why the kids liked it. The story was very realistic. I liked how the parents were portrayed and how they related the daughter—it seemed genuine and honest.”

My daughter and her friends were at the sneak preview of the movie prior to its release in our town, which was sold out. Reviews from critics and moviegoers have been overwhelmingly positive. It was number one at the box office and in it’s opening weekend, Entertainment Weekly reported that the movie made $48.2 million, making it as big as the classic Love Story, also about two young people in love and dealing with cancer.

When comparing the film to the book, reviews and feedback varied. Samantha P. says, “The book is definitely better. The book was more detailed and I felt more invested in the characters.” Adds Jenny M., “I thought the movie was well cast and true to the book. It was more emotional watching the story on the big screen than it was reading it. You could hear people sobbing throughout the theater.”