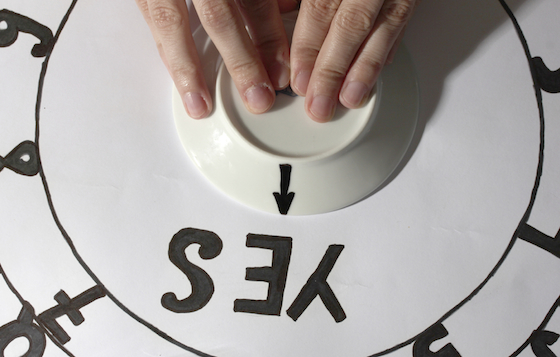 The chances are you’ve already heard about the “Charlie, Charlie challenge,” a craze sweeping through social media, with teens in their droves playing a spooky game which involves trying to contact a demon named Charlie. Silly fun, or potentially harmful?

People started to become aware of the game after several teens posted videos of them playing it, and it caught on like wildfire. Although there are many suggestions as to where the challenge originated, including the clever promotion for a new horror movie or an ancient Mexican tradition, it isn’t clear where the game came from; however, it seems to be a humble form of the more well-known Ouija board.

The principle of the challenge is simple: someone draws four squares on a piece of paper and labels two with “yes” and two with “no.” Two pencils are then placed on the paper, one on top of the other, so that they make the shape of a cross. To begin the game, the players must ask, “Charlie, Charlie, can we play?” If the spirit is up for a bit of fun and willing to take part, the top pencil will move towards one of the “yes” squares, and the game begins. The participants then ask Charlie a number of questions, and the pencil supposedly moves towards the “correct” answer.

The answer to this question depends on your own thoughts or beliefs. While many scoff at the ridiculousness of it, passing it off as harmless fun, many religious leaders are warning that playing the game could call on dangerous spirits which might be hard to get rid of, and kids are dabbling with supernatural forces beyond their control.

Even if you lean towards the idea that it is nothing more than a silly game, your kids might not take it so light-heartedly. Social media is awash with kids who are terrified, stating that odd occurrences happened after playing, such as mirrors cracking and furniture moving. To make it even creepier, the game needs to be concluded with “Charlie, Charlie, can we stop?” and the spirit needs to grant permission for the game to be over.

Many teens are likely to be affected negatively by the challenge: they are impressionable, more susceptible to being influenced by group hysteria, and can be persuaded to take part by peers- even if they don’t really want to. This naturally makes them more prone to believing in the supernatural power of the game, which could leave them very frightened.

The Science Behind It

Scientists believe there is a logical and simple explanation for the challenge: gravity. Balancing one pencil on top of another leaves the top one unstable. Add in some theatrical melodrama, such as a darkened room, and all it would take to move the pencil was some heavy breathing or an unconscious movement from one of the participants.

Another scientific theory suggests that people in circumstances like the Charlie game have a “response expectancy” about what will happen, and due to this, participants can subconsciously influence the outcome. In the same token, people will often read more into something than is actually there, and in terms of the Charlie challenge, kids may interpret the simple answers as being something relevant.

Additionally, the fight or flight response triggered by the game is the culprit in making kids more nervous after playing, causing them to be more aware of their surroundings, and misreading everyday occurrences, such as a power cut or a book falling, and attributing them to something more significant (such as the malevolent actions of a demon).

What Should We Tell Our Kids?

Parental opinions and feelings concerning the game fall into the above-mentioned brackets: those that think it is harmless nonsense, and others that believe the supernatural is real and are unsurprisingly worried and concerned about it.

If you are in the latter group, chances are that you will react vehemently, with strong emotions about the subject, leaving a tendency to overreact when speaking to your kids about it. However, it is important to remain calm and rationally explain how you feel, as jumping in with rants about the dangers of the supernatural and demons is likely to terrify kids, especially those that have already been unnerved by the challenge.

If you are in the group that isn’t remotely phased by the game, it still might be a good idea to warn your kids how scary it could become, especially when playing with other excitable teens in a highly-charged environment. Always make it clear that if they feel uncomfortable, they shouldn’t bow down to peer-pressure, and that it is perfectly okay for them to tell their friends they are opting out.