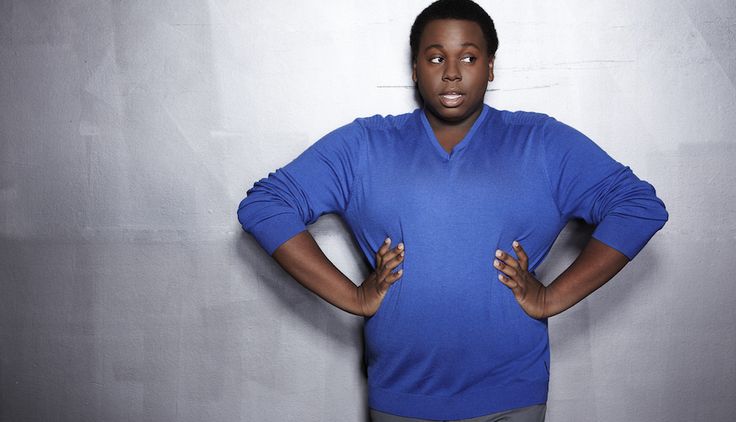 One may think Alex Newell’s character on Glee, Wade “Unique” Adams, could overshadow his real-life personality. Unique is a powerful and mesmerizing character—she always looks fabulous, wears heels often, and is not afraid to speak her mind.

Her strong, memorable persona could easily define Alex as an actor, and as a person. But with the first sound of Alex’s voice, I knew he was just as special as his character—if not more special. I automatically felt energized, excited, and inspired by his stories and his life. He expects that when someone meets him for the first time, they won’t see him as Unique, but instead will say, “Wow, [Alex] has great fashion taste and smells amazing.” Our phone call reaffirmed everything that I already admired about Alex: He is candid, honest, down-to-earth, upbeat, and charming.

Although Alex’s star power has blown up in the last year, he is not even close to forgetting where he came from. Alex grew up in Lynn, Massachusetts, a suburb of Boston, with his mother, Brenda. His father passed away from colon cancer when Alex was only 6 years old, strengthening his relationship with his mom, whom he talks to at least two or three times a day (despite the 3-hour time difference). Alex was recently signed by Atlantic Records and is currently filming the fifth season of Glee in Los Angeles. Nevertheless, he constantly has his home and his family in the back of his mind. He describes himself as a homebody whenever he isn’t on set.

Glee is known for touching on pertinent, real-world issues, specifically those involving high school, teenagers, and their families. From sex and catfishing to steroids and school violence, no subject is off-limits to Glee. These issues are what make the show so important, Alex explains. Glee is a catalyst for controversial and timely discussions—discussions on topics that are otherwise taboo. Alex encourages parents and teens to watch Glee together, and to discuss how the show relates to their lives. Not only is Glee entertaining and comical, but “It’s something that you and your family can watch together and converse about. It’s one of those shows that applies to everyone.”

Alex’s character on Glee plays an important role in the show’s message. Unique Adams is one of the most prominent transgender characters to ever appear on American television, and her storyline truly details the difficulties of a transitioning teen. I asked Alex how his own experiences in high school—perhaps as a gay teenager—helped him nail down his character. In response, instead of focusing on his gender or sexuality, Alex simply relates to being an underdog as a teen. He says, “You know, I think being the underdog helped me because this is a touchy [subject] in high school. People don’t immediately understand or accept underdogs.”

While Alex’s high school experiences contribute to his performance and interpretation of Unique, Unique also inspires Alex to think about issues outside of Glee—issues that Alex has never personally faced but that affect his character on a daily basis. He recalls what he has learned from playing a transgender character:

I’ve learned so many different things. Number one: Some- times you’re not aware of transgender issues that go on in your community. I wasn’t aware of these things until I literally had to sit down and represent it. Just be it. And I think that’s what I’m learning—learning what it’s all about, not just the physical aspects of being transgender but the mental part of it and the life of it all. And especially the heart of it all.

Whether or not Alex knows it, he is playing a huge role in America’s awareness and acceptance of the LGBT community. The fact that he plays one of the only transgender characters on television showcases the severe underrepresentation of the LGBT community in Hollywood. Unique Adams also points to the fearlessness of Glee and how the show is not afraid to put real teenage issues up for discussion. Some Glee viewers may be uncomfortable with the characters or storylines, but this is what makes the show so significant and rare. Alex asserts, “I feel like if it’s not uncomfortable, you never get the point of it all. I think if something doesn’t make you think about an issue, then it’s a waste. You always have to have a show that stimulates the mind and makes you really think about what actual people go through just to get the heart of it all and the understanding of it all.”

Unlike the rest of the cast, Alex can strongly relate to Glee fans, often referred to as "Gleeks". Only a few years ago, Alex was simply a viewer—a teenage boy who loved to sing and act, but who had no real training. When Alex auditioned for The Glee Project in 2011, he didn’t even tell his mother, thinking his chances were slim. Even though he was the runner-up in the competition, Alex was asked to appear in the third season, which turned into a regular gig.

I asked Alex what inspires him the most in his music, and what pushes him to succeed. “Plenty of people inspire me,” Alex says without hesitation. He elaborates, “My number one inspiration is Beyoncé. Everyone admires her because she’s beautiful and gorgeous, but I really admire her because her work ethic is beyond anyone else’s work ethic. During rehearsals, she’s right there with her dancers the entire time, learning the moves, taking time with them. Who else can fall down on stage and make it work and keep singing like nothing ever happened? Who else can fly from one end of the Staples Center to the other without even appearing as if it affected her?”

Alex and his mother, Brenda

Alex doesn’t only admire a strong work ethic—he embodies one as well. He broke into the entertainment industry with force and never gave up on himself and his dream. He knows that nothing comes easy and advises other teens to “Just be themselves... You have to do what you feel represents you best—and you have to work for it. Nothing is going to fall into your lap. Nothing is going to come to you. You have to go do it. You have to seize every opportunity you get.”

Alex’s strong work ethic undoubtedly comes from his mother. After my interview with Alex, I got the chance to talk with Brenda, who could not be prouder of her son. Brenda describes Alex as her “heart.” She articulates, “[Alex] is what I live for. We’re very, very close because he was only six when his father passed away, so I had to become both mom and dad. I always told him, ‘Don’t hold back.’ I got him involved in as many things as I could to try to take his mind away from the death of his father.”

It is clear that from the beginning, Brenda supported Alex’s dreams and goals, no matter the cost. She always knew Alex had extreme talent, and she let nothing stand in the way. She explains,

I used to take him to everything. To see the joy that he got from doing it, something that he really liked, made me want to make the sacrifice even more... I made the sacrifice because it was something that was improving his self-esteem. ‘I’m doing something great, Mom. I’m enjoying this,’ Alex used to say, and it gave me pleasure. If the child has a talent, I don’t think the parent should hold them back. Make the sacrifice.

As a single mother, Brenda regularly felt the financial pressures of providing for a budding star. She had to take on a second job to afford piano lessons and other extracurricular activities, but she did it with enthusiasm. Brenda adds, “I did everything that I could possible to make a dream come true for him.” It was all worth it, she explains, because when she would ask Alex what he wanted to be when he grew up, he responded, “I want to be a superstar!” Without Brenda’s ongoing support, Alex may not have grown into the celebrity he is today.

In a matter of years, Alex Newell transformed from a high school student with a passion to a television star with an inspiring message and voice. Not only does his character create a positive representation of the LGBT community, but Alex also serves as a role model for aspiring teenage superstars. He sends a message to teens that you can be whoever you want to be—you don’t have to conform to anything or anyone. You can be the underdog in high school but still come out on top.

In 5 years, Alex simply wants to be happy. “A lot can happen in 5 years,” he says, “But I think my goal is to be happy and comfortable.” Perhaps Alex will still be on television, or have a few albums under his belt. Or maybe he will spend his free time baking and shopping, his two favorite off-the-set activities. What Alex does know is that wherever he’ll be in the future, he will be smiling. I can hear the joy in his voice and picture his grin when he affirms, “Always do everything with a smile because if you can’t smile at the end of the day, you are doing something wrong.”


Unique Adams performing If I Were a Boy by Beyoncé.

To read more articles from this issue of Life with Teens, visit our digital magazine!