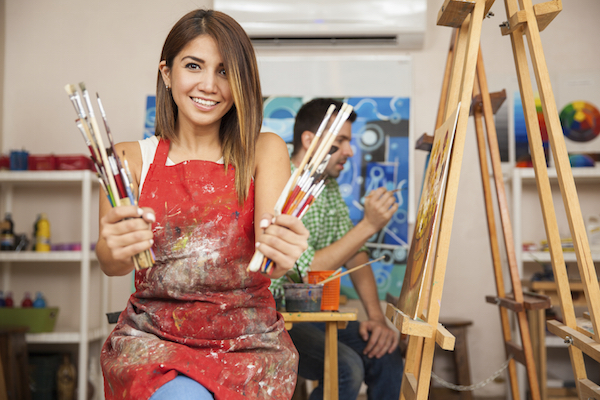 You’d probably expect someone working in a biologist’s observation outpost, such as Dr. Amber Pairis, or in a law office, like Dobrina Dobreva, to be a practical, hard-headed type.

You might never guess that in their teens, Amber studied art photography and Dobrina trained as a classical violinist, or that they believe their professional success has a lot to do with their arts training.

Very few high schools offer specialized arts training: Interlochen Arts Academy in Michigan, Walnut Hill School for the Arts near Boston, The Chicago Academy for the Arts, and my own school in Southern California, Idyllwild Arts Academy, are a few. These schools ask students to work hard in challenging academic subjects while also devoting hours every day to a chosen major like music, visual arts, theater, film, dance, fashion design, or creative writing.

But the rewards for attending an arts high school are great.

Among Idyllwild graduates recently surveyed by an independent educational consultant, 91 percent said the school helped them live independently and prepared them for creative thinking.

The benefits of creative thinking have been recognized for years. A 2008 Harvard Business Review story announced that the "Master of Fine Arts is the new MBA" and that in the "new creative economy," even "old-school corporations like GM increasingly value imaginative ‘right-brain’ thinkers."

"Many people see artists as shamans, dreamers, outsiders, and rebels." But in fact, "the artist is a builder, an engineer, a research analyst, a human relations expert, a project manager, a communications specialist, and a salesman. . . combined with the imagination of an inventor and the courage of an explorer."

Tepper’s expectations may seem like a lot to live up to. Yet since graduating from Idyllwild in 1992, Amber Pairis has done just that. Although studying art photography in high school looks like a roundabout path to a career in conservation biology, she points out that "arts education wakes you up to possibilities for thinking differently about the world and seeing innovative solutions to the challenges ahead."

Research into endangered species on the most remote Hawaiian Islands made her want to combat climate change, which she does now as director of the Climate Science Alliance-South Coast. Working out of San Diego, her area of responsibility stretches from Santa Barbara into Baja. "Alliance" refers to the partnership she is building between scientists and artists, which she sees as crucial to spreading public awareness of the need for action.

"With art you can appeal not only to the head, but to the heart. Art can bring along the community and the policy-makers by translating scientific research into something that touches your life in a personal way,” she says.

While Dobrina Dobreva’s route from violin studies to her immigration-law practice in Dallas may also seem indirect, she has a clear explanation. After graduating in 2002 from Idyllwild, Dobrina went to Southern Methodist University in Dallas, on a full scholarship in music performance.

"I came to Idyllwild from Bulgaria in 1999, and in college, people always want to talk to international students. Two humanities professors got to know me and realized my personality was helping people, so they said I should major in both music performance and international studies."

Because trying to get into the States as an international student had piqued her interested in immigration, she attended Thomas Jefferson School of Law in San Diego. She regularly sees connections between the law and her arts education.

"With law you have to be very creative, since every case requires a different approach."

Dobrina has probably been asked a thousand times to explain the link between her training in classical music and her law practice. She knows there is often another question lurking in the shadows:

"Is arts education good for anything?"

That one is good for a laugh.

[Looking for more info from the TeenLife Experts? Jumpstart your resume by thinking outside the school!]