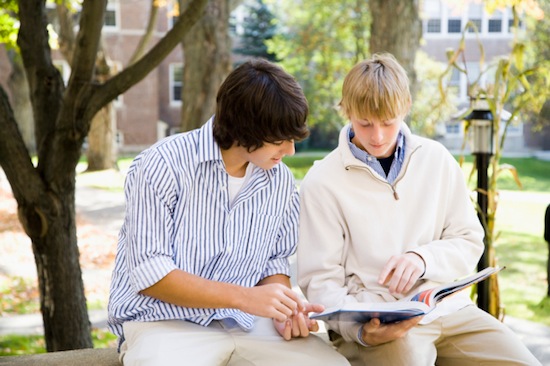 Are students capable of learning on their own? Is it enough for teachers to act only as mentors or coaches?

These were the questions being asked when Sam Levin, a junior at Monument Mountain Regional High School, set out to design a school run by students, for students: no grades, no tests, not even classes. The idea was to create a place where students could learn how to learn, and be in charge of their own curriculum. When the administration of Levin’s school granted him a semester-long pilot project, Sam was already ready with plans for the “Independent Project.”

The project started small: eight students from grades 10 to 12 chosen based on how well they could manage their time and their passion for learning. The students came from a variety of backgrounds in terms of previous success in school, including both low-income and high-income families.

Sam had noticed that many of his classmates were learning how to memorize information, but not how to gather and create their own information and interpretations. To combat this, the students began weekly research projects. Their time was theirs to manage. Instead of teachers choosing the books, assignments, and deadlines, they collaborated together and chose goals to work towards.

The topics were flexible: as long as it demonstrated effort, learning, and a mastery of skill, they were to research, experiment, or explore. Each weak, they presented what they’d learned to the group. The students could consult with Monument Mountain’s teachers and use the school’s resources as needed, but otherwise, they were on their own.

The first problem the students came into was managing their group’s dynamic. Giving each other constructive criticism and reaching democratic decisions was difficult at first — Without a teacher supervising, the students couldn’t always reach an agreement in an orderly manner, guidance counselor Mike Powell noted. Especially since the students thought they could keep their time perfectly well-managed, they made mistakes by setting unrealistic goals. “They learned that with control comes a great deal of responsibility, to manage time and be accountable,” said Powell.

Surprisingly, the second criticism came from outside the group and instead in the surrounding community. For those faculty members not involved in the development of the Independent Project, it was difficult for them to see how the students were earning their credit. They thought the program would be ineffective without concrete metrics and guidelines for what they were learning. To correct these misconceptions, the students tried to be as transparent as possible by making their final presentations about what they learned open to the public.

The program is ultimately not ideal for every student. Most high school students are neither interested nor ready for such an experience. The autonomy they receive is often a double-edged blade: It gives students a level of responsibility that they are no accustomed to and may waste.

Students feel an ownership in what they’re learning.

“If the question is yours, the answer’s going to feel great when you obtain it,” second-year student, Sandy Carmichael says. It seems that every student who participates in the project agrees that success here carries more intellectual meaning than it does elsewhere.

A first-year student reports spending more all-nighters in one semester of Independent work than his past three years of high school combined: simply because of his heightened curiosity and engagement. Students who have gone through the program ask more questions and gain insight into how they can use resources to answer them. They became more thoughtful in the way they consider ideas and evaluate sources, and improved at managing their time.

There’s mutual support every step of the way, especially when it comes the culminating part of the project: a collective three-week exploration where the students must come to an agreement on a topic and collaborate to make a presentation for the school. Students must work together, push each other, and offer both criticism and support in order for the project to reach its full potential.

There is also an altered incentive for students to stay on track. "If you blow off the Independent project, you’re letting eight of your friends down,” says Carmichael. "And that feels a lot different than getting a D on a test. So in that way there’s a lot more pressure to do well than in a normal school setting.”

At the end of the semester, everyone was satisfied. Parents said they were very aware of what was going on in the program because the kids were talking about school at home much more than they ever had in the past.

Students are allowed to be creative in a way not possible in more traditional environments.

The Project allows students to develop the non-academic interests they excel in, rather than force them to focus on those areas where they lack talent or interest.

Student Sandy Carmichael shares his take on the benefits of program: “I think every single person wants to learn about something. Even kids who are barely going to classes — they want to learn something. Whether that be the physics of skateboarding or how ice cream is made, this gives you the room and the space to really learn whatever you want.”

The school has chosen to continue the program, which runs for one semester each year and involves nine to twelve students, their individual interests, as well as group learning. Hopefully Sam’s initiative and leadership will inspire other students to push for similar student-designed programs at their schools.