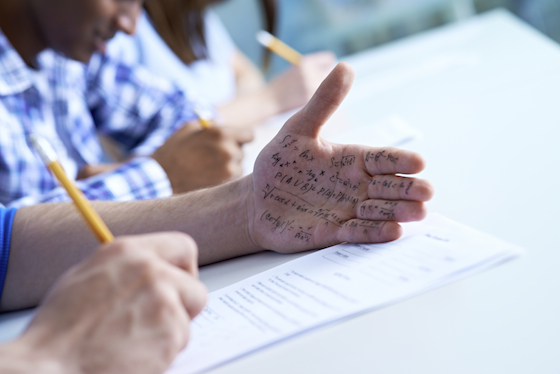 Allegations have recently been reported to the University Provost of widespread cheating among students at Stanford University. In a letter to faculty and staff, John Etchemendy, Stanford’s University Provost, discusses the unusually high number of allegations of academic dishonesty:

I am writing to inform you of an unusually high number of troubling allegations of academic dishonesty reported to our Office of Community Standards at the end of winter quarter. Among a smattering of concerns from a number of winter courses, one faculty member reported allegations that may involve as many as 20 percent of the students in one large introductory course.

Dishonesty is corrosive in an academic community. Our Honor Code commits students and faculty to "work together to establish optimal conditions for honorable academic work."

The university said it is investigating the allegations. It won't say how many students are suspected of cheating, but the school's paper said about 120 students in an introductory computer science course, could be in trouble.

"It's a pretty grave concern," said student Colin Bailie. "I think Stanford students are under a lot of pressure here, and this is certainly an indication of their cracking.”

Is cheating among students widespread?

Large-scale cheating has been uncovered over the last few years at some of the nation’s most competitive schools, like Stuyvesant High School in Manhattan, the Air Force Academy and, even Harvard.

Studies of student behavior and attitudes show that a majority of students violate standards of academic integrity to some degree, and that high achievers are just as likely to do it as others. When the Stuyvesant High School scandal broke, students were asked why cheating had become so common. Several students said that cheating was a symptom of a broader and more widespread problem with priorities at Stuyvesant, where competition for top rankings is intense and, some said, overshadows the substance of learning.

“I don’t think there’s any question that students have become more competitive, under more pressure, and, as a result, tend to excuse more from themselves and other students, and that’s abetted by the adults around them,” said Donald L. McCabe, a professor at the Rutgers University Business School, and a leading researcher on cheating.

Where does most cheating occur?

Most faculty members agree that cheating occurs in large courses like economics, math, and computer science where you have hundreds of students. Raymond Levitt, a civil engineering professor at Stanford, said he has caught only a handful of students cheating in the last 30 years. Notably, computer science classes in general tend to allow more sharing to occur, especially with things like coding.

Is technology to blame?

Internet access has made cheating easier, enabling students to connect instantly with answers, friends to consult via text and works to plagiarize. It is no doubt that the ease and use of technology along with widespread sharing has made it easier to cheat. The lines between sharing and appropriating the work of others has become unclear to students. A recent study by Jeffrey A. Roberts and David M. Wasieleski at Duquesne University found that the more online tools college students were allowed to use to complete an assignment, the more likely they were to copy the work of others.

In a world of instant downloading of information, searching online, and cutting and pasting, the lines of authorship and ownership have been blurred. Students are unclear as to what constitutes plagiarism or cheating. This could be partly because of a culture that elevates and rewards success even if it’s attained by cheating; and research shows that the easier it is to cheat, the more students will attempt it.

Has the problem worsened over the years?

There is evidence that the problem has worsened over the last few decades. Many parents and educators agree that cheating has become easier and more widely tolerated. Both the schools and the parents have failed to give students clear and strong messages about what constitutes cheating and discourage that type of behavior.

Added to the lack of guidance is the immense pressure to succeed. Experts say that along with students, schools, technology, and parents are also to blame. In a NY Times article, Studies Find More Students Cheating, With High Achievers No Exception, the case is made for the worsening problem:

Since the 1960s, parenting has shifted away from emphasizing obedience, honor and respect for authority to promoting children’s happiness while stoking their ambitions for material success. “We have a culture now where we have real trouble accepting that our kids make mistakes and fail, and when they do, we tend to blame someone else,” said Tricia Bertram Gallant, author of “Creating the Ethical Academy,” and director of the academic integrity office at the University of California at San Diego. “Thirty, 40 years ago, the parent would come in and grab the kid by the ear, yell at him and drag him home.”

Educators tell tales of students who grew up taking for granted not only that their highly involved parents would help with schoolwork but that the “help” would strain the definition of the word.

It’s clear students are finding it easier to cheat—and they are doing it more frequently. Whether you believe technology is to blame, parenting, pressure to succeed, or the inability of educators to communicate the importance of integrity, it’s time we all take a long hard look at what we believe constitutes cheating. We should change our attitudes and our behaviors to set a strong example for the next generation of students.