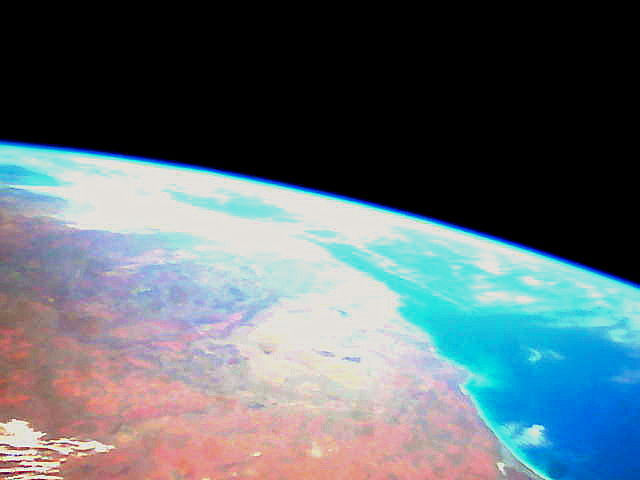 How many students can say they have worked on a satellite? At Vermont Technical College, one graduate student is getting the chance of a lifetime

Vermont Tech’s CubeSat Laboratory is working with Morehead State University in Kentucky to build an elaborate satellite – called the Lunar IceCube – that will launch in 2018 and begin orbiting the moon.

Vermont Tech is the only post-secondary technical college in Vermont and has residential campuses in Randolph Center and Williston. Students from all walks of life come to receive a top-notch, practical education.

Looking for water on the moon

Lunar IceCube is a $15 million spacecraft that is being assembled by Morehead State in collaboration with Vermont Tech. Using SPARK software development technology, the six-unit CubeSat will orbit for about six months to determine whether any ice, water vapors or liquid water exist on the moon.

“I’m still blown away by this opportunity,” says Chris, who came onboard in May and spends about 16 hours a week on the project. “We’ll be examining sections of the moon to find evidence of water, and the places we’ll be searching have never been looked at before.”

Chris, who is from Georgia, Vt., is an excellent fit for the Lunar IceCube project, Dr. Chapin says.

“Chris has lots of experience with software development, and he is also able to learn new technologies quickly and effectively,” Dr. Chapin says. “This is a great opportunity for him because it exposes him to a real spacecraft project and to SPARK technologies that are both powerful and somewhat unique. There aren’t very many SPARK developers in the world, but we need more of them since software controls so much of our lives.”

The satellite will be the first nongovernment spacecraft to use NASA’s Deep Space Network, which is an international array of giant radio antennas that support interplanetary spacecraft missions, plus a few that orbit Earth.

The Vermont Tech team needs to deliver the spacecraft by December 2017 for integration into the launch vehicle, Dr. Chapin says. Lunar IceCube is riding to the moon on the maiden voyage of NASA’s Space Launch System (SLS), which is the large-scale rocket being developed to ultimately carry humans back into space.

Taking the lead in space

On November 19, 2013, Vermont Tech was the first college in New England to launch a cube satellite. The CubeSat was launched as part of the ORS-3 Mission from the NASA’s Wallops Flight Facility in Virginia and part of NASA’s Educational Launch of Nanosatellites (ELaNa) IV program. Vermont Tech’s CubeSat was the only one of the 12 university-built mini-satellites launched that day that stayed in orbit for two years before being pulled into the earth’s gravitational field.

CubeSat and Lunar IceCube are quite different, Dr. Chapin explains.

“Our earlier spacecraft was built entirely by us using commodity hardware, and it only orbited the Earth. The purpose of it was largely to just demonstrate our ability to get a spacecraft launched,” Dr. Chapin says. “Lunar IceCube is gathering science data that is of actual interest to NASA’s space exploration agenda. Knowing where the water is on the moon will be important when and if we try building colonies there.”

The project was proposed by the team at Morehead State and led by Dr. Benjamin Malphrus, Professor of Space Science. Dr. Malphrus, who pulled together collaborators at NASA’s Goddard Space Flight Center and Jet Propulsion Laboratory, invited Vermont Tech to produce the flight software based on the success of the earlier CubeSat and the special software technology Vermont Tech is using.

So how did this small town Vermont college get chosen to contribute to this venture? SPARK, the software technology used by Vermont Tech, is what helped the school become involved in the project, Dr. Chapin says.

“The main thing we bring to the table, and the reason we were invited to participate in Lunar IceCube, is the software technology we are using. We write our software using SPARK, which is a programming language and a set of tools designed to help programmers mathematically prove their software correct,” he says.

“Experience has shown that many spacecraft failures are related to software problems. Most spacecraft, even large Class A missions like NASA’s New Horizons or Mars Science Laboratory, are programmed using less sophisticated software technology. Vermont Tech is unique in that our earlier CubeSat was the first spacecraft of any kind that used SPARK. Our role is to write the software that runs on the spacecraft.”

Out ahead on STEM careers

Vermont Tech is not only a leader in innovation, but the class of 2016 saw a 100 percent placement rate for all majors, proving that Vermont Tech’s hands-on approach to learning is successful. Because it’s part of the Vermont State College system, Vermont Tech is affordable for both Vermont residents and out-of-state students. Vermont Tech awards certificate, associate, bachelor’s and master’s degrees in over 40 different programs including nursing, software development, business, aviation, and dental hygiene.