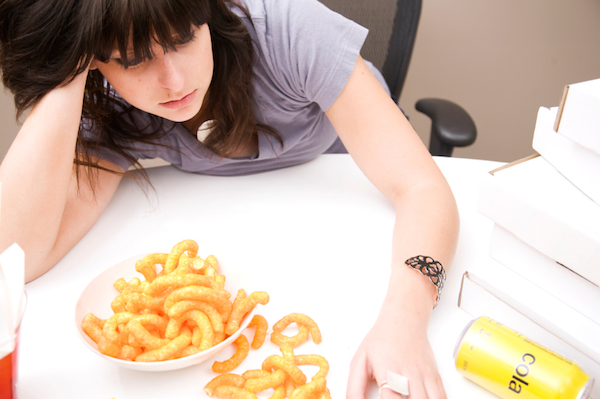 The stressors of adolescence are often the trigger for an eating disorder to develop, with an estimated 1- 2% of teenagers affected by bulimia.

Bulimia Nervosa is the second most common eating disorder, and is usually characterized by excessive eating (binges), followed by the immediate ridding of food consumed using laxatives, diuretics, or inducing vomiting (purging), all in an attempt to control weight. Additionally, bulimics can fast for long periods, consume very little (and then purge), or exercise rigorously. The disorder can affect both males and females, although it is more common in girls, and usually (although not always) has an onset during teenage years.

Why Does Bulimia Happen?

Bulimia is a condition that is closely associated with low self-esteem, and usually manifests between the ages of 13 and 17, a time when teens are experiencing huge changes, both physically and emotionally, and are increasingly aware of their appearance.

During puberty, some girls gain a little weight, which can often trigger feelings of being overweight and unattractive; this is not helped by the pressure to conform to society’s opinion of beauty, with stick-thin models and celebrities hailed as role models.

Often, bulimia brings teens a sense of control, especially if they feel powerless in other areas of their lives; it also provides a crutch to help them cope with emotional distress. Teens with existing conditions such as anxiety, depression and OCD, are more likely to suffer with an eating disorder.

Incidences of bulimia can also occur in teens who are heavily involved with sport, when they control weight to maintain a competitive edge. Many sports, including gymnastics, require a certain build, and teens may feel compelled to keep their weight down to a desired level (whether that is a perceived, or actually encouraged by sports coaches).

There are also some hereditary factors at play: teens who have parents with eating disorders are more predisposed to getting one themselves. This is not only down to genetics; a parent’s behavior surrounding food is often unconsciously passed on to kids.

Signs That Could Indicate Bulimia

Bulimia is often very difficult to spot if you’re not looking for it, with teens going to great lengths to hide what is happening; many feel ashamed by their behavior, yet compelled to continue in an effort to control their weight. Compounding the problem further is the fact that bulimics are generally within the normal-weight range, making it harder to identify,

Teens with bulimia will be preoccupied with their appearance, in particular, their size, constantly obsessing over perceived weight gain. They may start to exercise excessively, or become fixated over food, particularly how many calories they are consuming, or sticking to very rigid regimes and particular food groups.

One noticeable giveaway is a teen excusing themselves to go to the bathroom immediately after (or during) mealtimes; they may return looking flushed or agitated, but often there is no indication that anything untoward has just happened.

Common physical signs of bulimia include dental problems due to the excessive amount of stomach acid in the mouth, dry skin, thinning of the hair, mouth ulcers, abrasions around the lips, or even scars on the back of the hands as a result of constantly inducing vomiting.

How to Help Your Teen

Approaching your child about the possibility of bulimia is not an easy thing; many parents worry that they’ve got it wrong, or that their child is going to be hostile or upset. It is true that teens with eating disorders are likely to be angry and defensive, but they will also be frightened, so choose a time to talk to them when you are calm, approaching with a positive, respectful and non-judgmental attitude.

After speaking to your teen, and if you suspect bulimia, you need to get help immediately. Sustained abuse by binging and purging can cause a serious strain on the body’s functions, and in the worst-case scenario, can lead to a cardiac arrest.

Along with your invaluable support, your teen will need the help of a trained professional where a range of treatment options will be discussed. Focus is initially geared towards therapy (CBT works particularly well), which helps teens understand why they are bulimic, and offers coping techniques and strategies.

Teens often benefit from being part of a support group, although care needs to be taken to ensure that they are not seeking guidance from one of the many pro-bulimia online forums, which can hinder recovery, rather than help. In some serious cases, teens with bulimia may need to be hospitalized, especially if they are malnourished, depressed or not responding to help and treatment.

Sadly, there are no quick-fix cures for bulimia, and parenting a teenager with the condition is fraught, frustrating, stressful and downright terrifying. The most important thing you can do is be there for your child, not heap on any demands or unrealistic goals, remain patient and positive, and take each day as it comes.