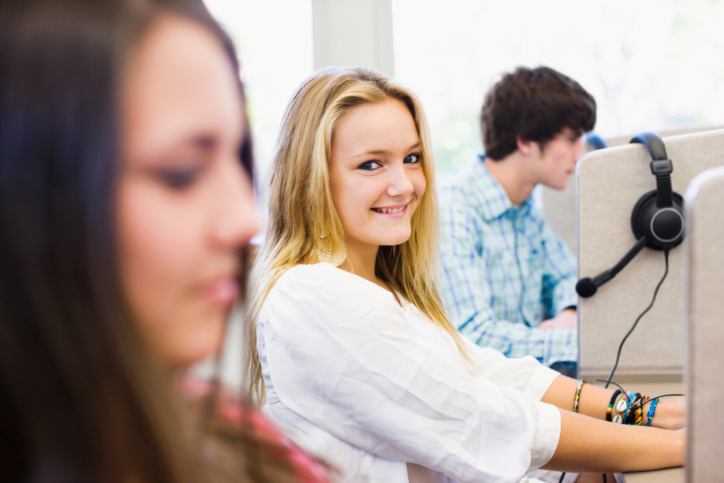 In the movement towards STEAM education, high schools and colleges have been paving the way.

The lead art teacher at Andover High School in Andover, Massachusetts is making good on RISD’s second objective for the STEAM movement. For several years, RISD alumnus and art teacher Meghan Reilly Michaud has partnered with the high school’s math department to teach “Geometry Through the Lens of Art,” a museum field trip during which students examine the ways that artistic perspectives and geometric concepts are inherently related. Due to her advocacy, Andover has officially incorporated STEAM into their 2013 – 2015 system-side strategic educational plan.

K- 12 students are increasingly exposed to science through art. Rebecca Alberts, a teacher at the Lab School in Washington, D.C. which serves students with language-based learning disabilities, offers ideas on Ohio State University’s College of Education and Human Ecology’s website, “Beyond Penguins and Polar Bears,” including:

Summer programs for high school and college students also tap into the two disciplines. Students participating in the Aspiring Scientists Summer Internship Program at George Mason University are assigned hands-on research projects in a range of fields including bioengineering, chemistry, nanotechnology, neuroscience, and more. As an integral part of their investigation, each student creates a work of art to visually explain their research.

STEAM initiatives at the powerhouse technical university -- Massachusetts Institute of Technology (MIT) -- are also blurring the boundaries between art and science. MIT professor of electrical engineering and computer science Erik Demaine received a $500,000 MacArthur Fellowship, known as a “genius grant” for his “computational origami, an interdisciplinary venture on the boundary of computer science and mathematics.” At only 17 years old, Demaine proved through mathematics that it is possible to create any conceivable straight-sided shape by folding a piece of paper and making only one scissor cut. This discovery launched the field of computational origami with commercial applications such as the design and folding of automobile airbags for efficient containment and effective deployment.

Innovation that matters happens when creativity and knowledge come together with resources, freedom, and diversity of opinion. Innovation is very hard to squeeze out of a vertical focus. Imagine how powerful it is when a very creative designer also knows the science behind the materials she is working with. In our part of the medical technology world, it’s particularly important to know how materials will behave in different conditions and under different stresses. But it’s equally important to see beyond what’s been done with them before.

The 2008 award-winning documentary film, “The Science of Art. The Art of Science. Between the Folds,” by Green Fuse Films, explains how origami has expanded beyond art to incorporate advanced mathematical and scientific theories and computer modeling technology. The hour-long film chronicles the stories of “Ten contemporary fine artists and intrepid scientists who abandoned careers and scoffed at hard-earned graduate degrees –- all to forge unconventional lives as modern-day paper folders.”

Another commercial collaboration teams the research scientist Leila Takayama of the robotics company Willow Garage in California with Pixar animator Doug Dooley. Together the pair generates and morphs ideas for personal robots. Smartplanet captures Takayama’s view of the power of the artist-scientist partnership in an article titled, “To Innovate, Scientists and Engineers Find Inspiration in the Arts.” Takayama explains, “Invite an artist to become an integral part of a research and development process, rather than as an outside observer or as an afterthought. Artists who are deeply involved in the design of a product can offer fresh analyses beyond what more science or data-driven inventors might provide.”

Stay tuned for Pt. III of "Turning STEM into STEAM."