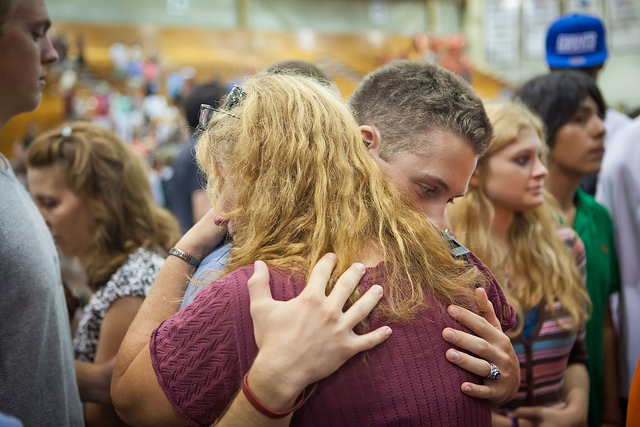 Colleges are about to start.

As campuses gear up for orientations, and college-bound students gear up for all the firsts of college life, parents of the college-bound too are gearing up. Perhaps they help purchase lamps and shower caddies. They balance out their needs for a few special moments with their rising college students with all the peer goodbyes. They wonder where that time went.

If I am describing you, I’m sure it’s a moment of mixed emotions. I don’t think there is a magical formula to make the transition guaranteed to be smooth or easy. Marshall P. Duke, former head of the counseling center at Emory University, offered some advice in the form of what he says to incoming parents when their children begin Emory. It’s a talk he’s given for decades. His advice is so wise that I wanted to share the high points.

It’s an emotional day to be sending your child off to college.

This is especially so with a first or a last child. The shape of family shifts on this particular day. Duke points out that it’s not just an emotional day; this is one of the most emotional times in parents’ lives. There’s uncertainty, as is always the case with transitions. Even though this is a significant moment, the actual completion of transitions within the family unfolds over months and years.

Just because your child is a college freshman doesn’t mean he or she is a college student—yet. Duke describes “high school students at college.” How long until your child is an actual college student? Duke figures about a semester, during which “the students will have studied for and taken major exams, written papers, given in-class reports, messed up, done well, fended off the ‘freshman fifteen’ weight gain, drunk gallons of coffee or other stimulating beverages, eaten uncountable pizzas and attended a variety of college events, some noteworthy, some forgettable.” Is there anything for a parent to do? He counsels not worrying and waiting. He acknowledges that these two activities are the antithesis of modern parents’ habitual responses.

In the midst of the emotional jumble that characterizes this very big day, if you possibly can, Duke counsels that you let your words count.

It’s tempting to fall back into micromanagement—make the bed, watch the spending, and all those reminders—but resist, he says. Instead, choose your words carefully and think big. He says to talk about “things you feel about them as children, as people. Wise things. Things that have guided you in your life. Ways that you hope they will live. Ways that you hope they will be. Big things. Life-level things.” He adds that he was unable to pull off this particular feat himself—too emotional and if that’s the case for you, all is not lost. He suggests that after you leave you write a letter, a real letter—not typed or emailed, but in your own hand. He assures parents: “Its message will stick. Always.”

Finally, he asserts to parents that their kids will do beautifully and they will be proud, but that perfection is not the goal. It’s that the children they’ve so “carefully nurtured” will be okay.