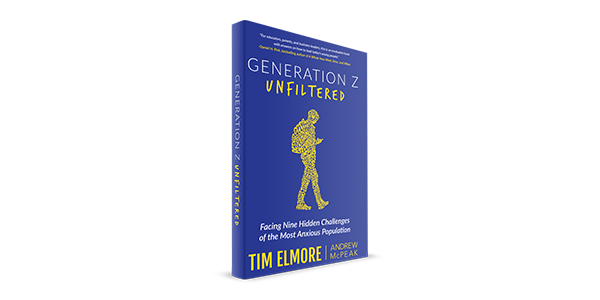 Generation Z Unfiltered—Facing Nine Challenges of the Most Anxious Population

This is excerpted from the new book: Generation Z Unfiltered—Facing Nine Challenges of the Most Anxious Population by Dr. Tim Elmore. Available now at: GenerationZUnfiltered.com.

Since 1979, I have been committed to mentoring high school and college students. Over time, I’ve noticed the experiences that seem to be the most meaningful ones to my mentees. I’ve recognized how these experiences mature those young leaders as well as build grit and depth in them. Collectively, they serve as a sort of “rite of passage.” Due to the high anxiety levels and the hours Generation Z spends on social media, I believe they need these experiences more than ever. I invite you to consider inserting them as you mentor teens.

There is something about stepping out of our comfort zones to attempt a risky act—that’s unfamiliar and even a little frightening—that makes us come alive. Our senses are heightened when we feel we are taking a risk; we don’t know what we’re doing; we have to trust and rely on each other. Ideally, these initiatives are intentional and well planned, but they should not be scripted. They must include the element of chance. As a mentor, I’ve taken my mentees downtown to spend the night with homeless people, sleeping on trash bags with newspapers as a blanket. A small dose of “risk” mixed with a big dose of “unfamiliar” accelerates growth.

When my son was 12, he and I took a father and son trip to another city. We explored loads of new places, but the scariest event on the four-day trip was when I traded places with him in our car and had him drive it around a parking lot. After explaining the gears and pedals, Jonathan overcame his panic and drove that big automobile. Within moments, he was grinning from ear to ear. It turned out to spark an extraordinary conversation, comparing that fear to what he’ll experience becoming an adult. Adulthood is not for the fainthearted; it is about responsibility; being “drivers” not “passengers” in life.

Facing fears is a rite of passage for teens. Doing something that’s neither prescribed nor guaranteed unleashes adrenaline and other chemicals in our bodies that awaken us. Fear responses produce endorphins, which can be a sort of natural high. Other "feel good” chemicals can also come into play with “scary” experiences, including dopamine, serotonin and oxytocin. Part of the reason more teens don’t “come alive” is we’ve protected them from these rites of passage in the name of safety.

Another challenge for them to rise to is meeting someone they deem “significant.” Because Gen Z is less at home meeting adults face to face, the encounter itself stretches them. On top of that, meeting significant people invites them to prepare questions to ask and fosters listening skills as well. These can be famous people, but they don’t have to be. The key is they’re people the students believe to be important due to what they’ve accomplished. I was invited to participate in a special meeting in Washington D.C. when my daughter, Bethany, was just nine years old. Because I was going to get to meet congressmen, ambassadors and other civic leaders—I wanted her to experience it with me. Encountering such significant professionals can be intimidating, even to adults like me. But it was fun to introduce her to these people and witness her interacting with them. She eventually felt quite at home, answering their questions, asking them questions and even raising a few eyebrows.

I was fortunate for the first 20 years of my career to work for best-selling author John C. Maxwell. My kids knew how important he was to so many and were fortunate enough to build a relationship with John and his wife, Margaret. Interacting with the Maxwells enabled them to overcome social intimidation and to see noteworthy people as “human.” Today, my kids are not star-struck with celebrities and are comfortable interfacing with people of all ages.

Teens need for adults to let them pursue an objective that has high stakes and to give them full control. Past generations matured more effectively because they were given responsibility for jobs and goals that had genuine meaning at a young age. When we lower the stakes, or we give kids an artificial purpose to engage in—we end up with artificial maturity. While I believe in the value of academics, it’s still a facsimile of a meaningful world, created by our current structures. I meet too many students who master the skill of getting a good grade, yet have trouble translating those grades into a career. “Book smarts” gain meaning as they cultivate “street smarts.” Information must become application.

When I speak of chasing a big goal, I mean aiming for a target that has deep meaning to the student, one that stretches their capacity and that has high stakes. As a young teen, my son became heavily involved in community theatre programs, and felt he wanted to enter the entertainment industry, film and television. So, my wife and I decided to let Jonathan pursue his big dream at 16 years old. At the time, she was home-schooling him, so we had a bit more freedom with his time. After confirming the seriousness of his ambition, he and his mother moved from Atlanta to Los Angeles for seven months to try his hand at acting. He did all the work to see if this industry really was his passion. The experience was revealing, as you can imagine. He soon recognized that actors do play a role (literally) in that field, but the real influencers are the storytellers. The ones behind the camera, not in front of it.

When he moved back home, Jonathan was a different young man, more passionate and clear about where his talents lie. He later earned a degree in screenwriting and entered a career in storytelling. He’s writing scripts every week. I believe the key was allowing Jonathan to chase a big goal. Suddenly, he had ambition.