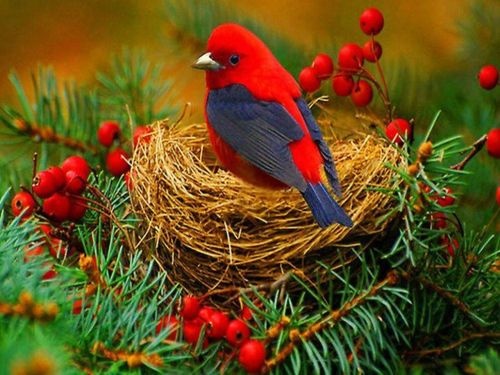 A bird is termed "nidifiguous" if its offspring leave the nest shortly after hatching. While human teenagers are by no means so quick to depart, you wouldn't guess so from watching!

With birds, it's so graceful; the mother gives the chick a firm push and out it flies into the world, a free bird. With us, it's not so pretty. After eighteen years (or sometimes even longer), we are driven to a college campus for the last great family road trip between recounted memories, sappy songs on the radio, and nostalgia. We unpack, sometimes with fanfare, sometimes without, and there we are. And then our mother goes home and cries for a few short months.

Maybe I'm being a little over-dramatic. But the point still stands that this so-called "Empty Nest" syndrome has gained a major place in the parenting world.

But is it deserving of such recognition? Some psychologists say it is not. It's important to think about my own -- and others’ -- independence as leaving for college becomes a reality, as well as the adverse effects it may or may not be having on my mom and parents like her.

But before we set out to disprove it, what exactly is Empty Nest Syndrome. Tara Parker-Pope writes in a January, 2009, article in the New York Times that Empty Nest Syndrome is "a time of depression and loss of purpose that plagues ... mothers after their children leave home." This, I think, can be split further. First into the more immediate separation anxiety and secondly into that "loss of purpose" that accompanies a child's absence.

To the second point, the Times article, entitled "Your Nest Is Empty? Enjoy Each Other", goes on to reference several medical studies - from places like the University of Maryland, Mills College, the University of Nebraska, and Ohio State University - that suggest an increase in so-called "marital satisfaction" and overall happiness in couples after their children leave the nest, so to speak. The article quotes Sara Melissa Gorchoff, Ph.D., of the University of California, Berkeley, as saying that "there are fewer interruptions and less stress when kids are out of the house; ... the quality of time [the couples in the study] spent with each other ... improved."

So, it would seem that, despite the universal acceptance of Empty Nest Syndrome as a part of life (and, as the article mentions, the burgeoning self-help genre dedicated to these supposedly depressed empty nesters), parents are usually "just as happy" - according to the Times piece - or even happier with each other after their children have flown the coop.

But what about that first type of sadness?

That separation anxiety that occurs somewhere between dropping the student off at college and arriving, tearfully, at home; what of that? Even if Empty Nest Syndrome is farcical, I believe - albeit from my little experience with this specific life event - that this is where parents and students truly realize that this is the utter end of childhood (or adolescence, if you must), and, likewise, parenting. That this is where the lives of both change irrevocably and forever.

With thought, though, this change can be one for the better. For the parents, as established, the newfound freedom of a so-called empty nest can be both relaxing and liberating. There is more time to spend with one's spouse and on one's personal hobbies. In the long run (and please pardon the melodrama here), a child's independence creates a new family generation; one that blazes new paths into the future and one that, by necessity, cares for its predecessor: the parents. For the student, the new opportunities and new independence afforded by a college education and life away from one's parents are hugely valuable and exciting.

As the echoes of July Fourth fireworks still ring in our ears and the red-white-and-blue bunting still adorns our town squares, I'd like to reframe this situation as a simultaneously genuine and tongue-in-cheek analogy to the American Revolutionary War: a fire-branded, teenage America is constantly rebelling against its parents, Great Britain - the same ones who founded it in the first place. Desperate not to lose its dear colonies, the Monarchy imposes new regulations and tariffs (think curfews and increased focus on grades) on the Yankee rebels. To the child, that's the last straw. Through a series of battles much bloodier than even the worst college search process, America prevails and frees itself from the "establishment of ... absolute tyranny," as future-President Jefferson so aptly put it in the document we commemorate each Fourth of July.

With the Louisiana Purchase, America finally moves out of the house. With the Industrial Revolution a few decades later (and after we get into a brief spat with our parents in 1812), America even gets a job. Slowly, as America divorces then remarries the South, the parents across the pond start to see what a success their child is becoming. Eventually, the parents get into a major feud with their neighbors, and World War One tests Great Britain - and indeed all of free Europe's - resolve. The child sees its parent in trouble, and we help. When an evil presence asserts itself on that continent a decade later, and even though we are facing tough times at home, we help again. What started as a tense and bloody parting has ended with one of the deepest international friendships the world has seen to date.

Too much of a stretch?

Try writing your own analogy that fits Independence Day to Empty Nest Syndrome.

In any case, and to summarize, the child needs to leave, no matter how painful it is for both parties, so that he or she can achieve what he or she will in life, and, eventually, come to the aid of the parents when the time comes. The apparent increase in happiness afforded the newly-independent child and the independent-once-again parents simply sweetens the deal for all involved.

Be sure to take the time to realize that while this change can be a very sad or even painful one, it's one that is not only necessary, but gives way to even more good things on the horizon.