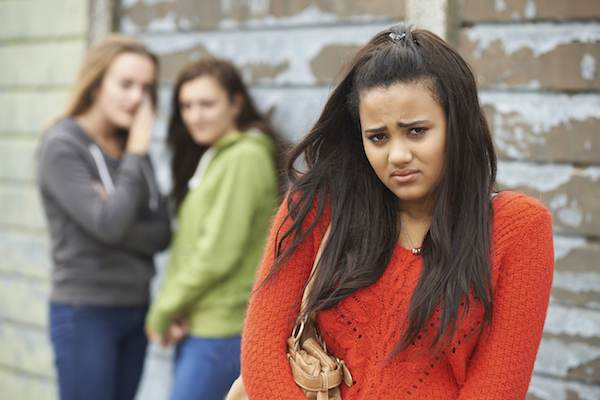 What is street harassment?

Street harassment is a form of harassment that happens in public space. It can happen when you’re walking down the street, riding the subway, or hanging out in a coffee shop. It can happen in the hallway at school or while you’re riding your bike.

It ranges from catcalling (“Hey, baby!”), whistling, staring, and stalking to more physical violence like groping or flashing (when someone exposes themselves in public). Everyone experiences street harassment differently. For example, maybe you don’t think that strangers telling you they like your hair is harassment, but your friend does. That’s OK! Each person gets to define harassment for themselves, but what it all has in common is that the person who experiences feels that it is unwanted or threatening.

Street harassment often affects people who move through the world in marginalized bodies, like women, queer folks, trans people, and people of color. It’s very often gender-based, but harassment can also be based on race, sexuality, class, size, or ability, too.

Maybe it looks like a white person touching a black girl’s hair without asking her.

Maybe it looks like someone calling a trans woman “he” when she has asked for female pronouns to be used.

Maybe it looks like a guy asking a girl on the street for her number and them calling her names when she doesn’t give it to him.

What’s scary about harassment is that it can escalate from what may seem like “harmless” commentary to physical violence if the harasser doesn’t like the response given by the target. It’s important to understand that, in most harassing situations, the person doing the harassment is someone who has some kind of societal power, and the target often does not. So, a man harassing a woman; a white person harassing a person of color; a thin person harassing a fat person. There are always power dynamics involved in street harassment, which makes it harder for the targets to deflect.

What is the difference between harassment and a compliment?

One of the most common defenses of street harassment is that the harassing behavior is actually intended to be a compliment. But here’s the thing: When something is truly a compliment, it’s given with no expectation attached to it. The person who gives the compliment just really wants the other person to know that her hair is bangin’ or that he looks great today.

But, as we see when street harassment escalates to name calling or physical violence, harassing commentary often has an expectation attached. Particularly when men comment on a woman’s appearance, they expect her to be grateful, or to talk to them, or to give them her number. The “compliment” is really just an opening to get something from the woman.

Also, compliments don’t make the recipient of them feel unsafe or threatened. When men approach unknown women in public space and try to talk to them, it’s often threatening. So if you’re intending to compliment someone and they feel uncomfortable, it’s not really a compliment.

What can you do if you’re being harassed?

So what can you do when you’re experiencing street harassment? The best thing to do is whatever makes you feel safest in the moment. If ignoring it or walking away is what feels safe, then that’s what you should do. Always assess your safety by looking at your surroundings. If you’re alone and isolated on a dark street, you may not want to risk escalation by responding to the harassment.

Maybe you turn the music up on your headphones to drown it out. If you do choose to respond, try to stay calm and assertive and make direct statements like, “Stop touching me. I don’t like it,” or “Stop harassing me, it’s not respectful.” And always practice self-care after the fact, if you can.

What can you do if you see someone else being harassed?

If you witness someone else being harassed, you should still assess the safety of the situation before deciding to intervene. Bystander intervention can be dangerous, but there are safer ways to still make a difference. Just staying to witness a situation can help prevent it from escalating. It’s also nice to check in with the target of harassment after the fact. Doing that validates the experience and lets someone know that you saw what happened, and it wasn’t OK. If your friend is harassing someone, that’s a great opportunity to step in and say, “Hey, that’s not cool.”

Ultimately, it’s always the responsibility of harassers to stop engaging in harassing behavior, but there are things that the rest of us can do to support each other, too.

[Looking for more safety tips? Check out our post on teen dating violence.]