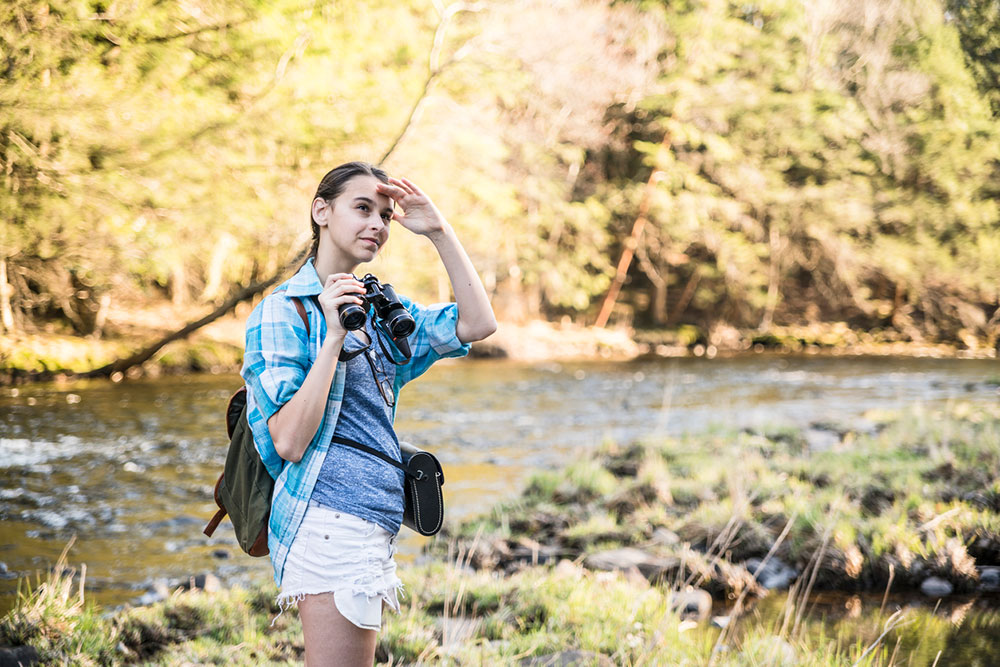 For Lowell George, every day is Earth Day. She found a way to merge her interest in science with her love for the outdoors – and turned it into a solid job.

She’s among the students who discover that participating in a STEM summer program or majoring in science, technology, engineering or math can lead to a career in sustaining and improving the environment.

“My dad would take my sister and me hiking from when I was age 3,” said George, who grew up in Briarcliff Manor, N.Y., a small village 30 miles north of New York City. “Later I got into skiing, kayaking and canoeing. I didn’t realize it at the time, but I was growing an appreciation for the outdoors from the time when I was really little.”

She was undecided about a major when she started at Cornell University. “I looked through the course catalog, and a lot of the classes I was interested in were in the environmental sciences,” she said. “I’ve always liked being in the outdoors. I was excited about studying it when I realized that it could lead to a career.”

After graduating from Cornell in 2014 with a bachelor’s of science in natural resources, George interned at American Rivers, a nonprofit dedicated to protecting and restoring rivers, where she now has a job as a national river cleanup manager.

“It’s a perfect job for someone who loves science and wants to help save the world,” she said.

Restoration ecology – the practice of restoring ecosystems that have been degraded, damaged or destroyed – combines hands-on work and creativity, according to Kate Ballantine, assistant professor in environmental studies at Mount Holyoke College in South Hadley, Mass. “It bridges the gap from learning science to producing knowledge,” she said.

Environmental work attracts students with a range of interests. “Along with environmental science, it often involves numerous branches of the natural sciences, as well as policy, engineering, psychology, education, sociology, history, social justice and even the arts,” she said.

The multidisciplinary approach is one of the things that attracts students, Ballantine said. “They enjoy working with people who are developing different kinds of expertise and coming from a lot of different majors.

“We’re seeing more of that model in the real world. I see a lot of interest from employers in students with this kind of training. Exciting and meaningful jobs are available all over the globe. They need deep thinkers. It’s a very young field, and there’s a lot of room for contributions in projects around the globe.”

Issues such as climate change and soil erosion can seem overwhelming to students, Ballantine said, but they learn that using scientific methods and creative thinking gives them a way to contribute. “They end up feeling optimistic and empowered,” she said. “They really bond over a chance to help heal the planet.”

Environmental scientists aren’t the only ones working to save the world. There are other kinds of STEM careers that support the environment.

“There’s always a place in engineering for people who want to make the world a better place and protect the environment,” said Karen Davis, director of career services in the department of engineering and computer sciences at Syracuse University. “There are a lot of directions. You can work for the government, business or nonprofits.

“Engineers change the world in every possible way. The water you drank today – was it clean? Engineers helped make that happen, from civil engineers to chemical engineers,” she said. “We have to worry about nature. We need to have clean air. We have to think about water and the ways we use it. Engineers have a role in all of that.”

From bioengineering to wind power, engineers are on the cutting edge of ways to make the best use of the planet’s resources, Davis said. And, high school students can see if they like it through an array of summer engineering programs.

“Engineering is a wide-open field. You can be anything you want if you come out of college with an engineering degree. They teach you how to problem solve and think strategically,” Davis said

“There are so many places where you can make an impact. If you want to affect the future, engineering is the path to take.”