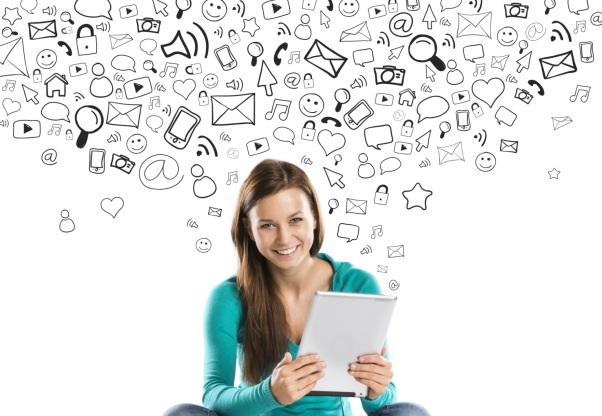 Colleges are embracing social media: Recognizing it as a marketing tool, a student communication tool, a teaching tool, and even a career path. Colleges and universities recognize that the world is racing toward this type of communication and they are addressing it.

Indiana University of Pennsylvania lists on its website nearly 200 links to campus-related social media sites and feeds, including the school's YouTube channel and Foursquare account. There's the Facebook page for the chemistry department, the equestrian team and the honors college, the LinkedIn account for Greek organizations and other groups, as well as Twitter feeds catering to interests ranging from study abroad to tennis. And this is just one example of a college taking the social media lead.

Social media as a marketing tool.

Colleges are using social media to reach potential students, interact with current ones, and market their image.

Using Pinterest and Instagram, colleges post photos of their campus, the surrounding area, student events and student activities. It gives potential students a glimpse of campus life and provides current students a way to interact by following the colleges’ Pinterest boards or Instagram feeds.

Students today are on top of all technology, especially as it applies to social media. Walk around any mall, eat at any restaurant, or watch students at school and you will see them on their smartphones. They use these devices on a constant basis to communicate with one another and even their parents. It makes sense that colleges are using social media channels to interact with their current students.

An article in the Pittsburgh Post Gazette, explains how one college has adapted this philosophy:

The food court in the Nicholson Center alone has 31 big screen TVs, more than a dozen of which carry social media, Mr. Loche said. Then there are those elsewhere on campus, including the Alumni Commons Gazebo, a campus gathering spot.

Mr. Locke said students light up when they see a tweet or a photo they posted shows up instantaneously on the campus screens.

Using social media on campus to promote activities and events makes it easy to connect with students and at the same time. It’s a win/win situation for colleges.

[Browse STEM opportunities for teens to prepare them for college.]

Social media as a teaching tool.

In an October 2013 survey conducted by Babson Research Group of Babson College, faculty members responded they are using social media in the classroom and are finding technology to be both a help and a hindrance. Faculty members’ use of social media has been steadily increasing since the survey was first conducted in 2010. About 60 percent of respondents said the interactive nature of online and mobile technology is creating better learning environments, and 78.9 percent said technology increases faculty and student communication.

Another study released from Michigan State University discovered that courses that engage students on Twitter may actually see higher interaction and better grades. It found that students who were actively engaging with classmates and the instructor on Twitter were more interested in the course material—and ultimately received higher grades. They feel connected to the professors and to other students in the classroom. Students who might not participate in discussions find it easier using technology as a tool for interaction. An added benefit is that using Twitter in the college classroom is that it helps students gain the ability to write more succinctly.

Social media as a career path.

According to Netpop Research, “Social media use in the U.S. has increased 356% since 2006.” Recognizing the demand for students with social media backgrounds, colleges are beginning to offer majors and minors in social media. In these degree programs, students are being taught the techniques of social media use and the development and direction of social media as a creative industry. This discipline teaches students to develop marketing and branding strategies for projects needed by corporations, non-profits, the entertainment industry, the sports industry, news and politics, etc. In addition, graduates have an entire array of social-media based companies to tap into upon graduation.

There is certainly a demand in the marketplace for graduates who are adept in social media. To find these majors, search within the colleges’ arts and communications programs. Newbury College in South Carolina introduced the degree in the fall of 2013, stating that “Students will be able to do many things both analytically and creatively. Collect and study data, market, create, design, broadcast and develop are just some of the skills a graduate will have as a part of their social media toolbox.”

New social media platforms are being developed daily and any graduate without social media savvy will find themselves behind the curve, and lacking the critical skills that businesses are looking for in a new employee.