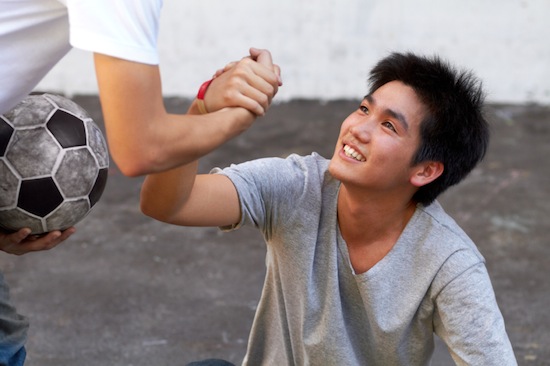 This past month, a California High School girls’ basketball game received a lot of media attention. The Arroyo Valley HS team (one of the better team’s in the region with a 15 to 1 record) beat the winless Bloomington HS team by a score of 161 to 2. After the game, Michael Anderson, the coach of the Arroyo Valley team was suspended for two games.

“Unfortunately, lopsided scores happen every year, and especially during the basketball season,” says Rick Wolff host of the WFAN show Sports Edge. “It's one thing for a team to lose by 20 or even 30 points, but once you get beyond that number, something isn't right.”

Wolff says, “At the very basis of all youth and amateur sports, sportsmanship should always be observed. That means it's incumbent on the coaches to be very watchful that lopsided scores don't take place in these games."

In the California high school game, the team was up 104 to 1 at halftime.

"The game just got away from me," said Anderson to the San Bernardino Sun. "I didn't play any starters in the second half. I didn't expect them to be that bad. I'm not trying to embarrass anybody."

Wolff argues, “It's always clear to any coach at any level of sports that a game may be quickly getting out of hand. If the score is ridiculous at halftime, as it was in this Southern California high school, the coach with the lead should approach the losing coach and see if he or she would like to call the rest of the game off. If you're up by 70, 80 or more points, the game itself is not much fun for any player on either team.”

Keeping it Fun and Fair

In four other games this season, Anderson’s team had won by at least 70 points, which leads to the question, “How much is too much to win by?”

Most town sports programs for kids and travel teams have mercy rules in place. For example, in travel soccer, once a team is up by 6 goals they stop scoring and just play defense. In baseball, there can be a maximum number of runs per inning and an implied rule that if a team is winning by a lot, the players should stop stealing.

In basketball it might be a little harder to set a specific number of points a team can lead by. But there are ways that the coach could have stopped the score from getting so high. Wolff suggests, immediately stop doing any kind of full-court pressing of the other team and putting reserve players into the game. times before

While high schools may not have set mercy rules, good sportsmanship and common courtesy should prevail.

Wolff says, “To me, the responsibility to maintain good sportsmanship and to do the right thing starts with the coach who's winning big.” Some have argued that the coach of the other team in the Southern California could have asked the referee to end the game earlier when it was clear they would not win and before the score got so high.

But players could also have slowed the pace down. While it is important for players to listen to their coach, they also have to be true to themselves. The players could have slowed down the game by taking less shots and increasing their passes before shooting.

No one on either of the teams- coaches, players or spectators - could have felt good about the final score. Anderson himself admitted to the Orange County Register, "It wasn't a good feeling (afterward). "It's not something I'm proud of.” Even at a high school level it is important for everyone involved to remember that these are no professional games – these are kids.

You Can Lose But Still Win

Winning and losing are a part of sports and there are lessons to be learned by players and coaches on both sides of the scoreboard. "People shouldn't feel sorry for my team,” said Dale Chung, coach for the Bloomington team "They should feel sorry for hi (Anderson’s) team, which isn't learning the game the right way.”

Last year my own son’s little league team lost every one of their games and several were shut outs where the other team scored over 20 runs. It was clear from the start of the season that they were mismatched. Midway through the season my son started getting discouraged. But then with the help of a great coach, he realized that he could have fun even when you don’t win any games. He also gained compassion. Now when he is on a winning team, he makes sure to be a gracious winner and because he truly understands what it feels like to lose.