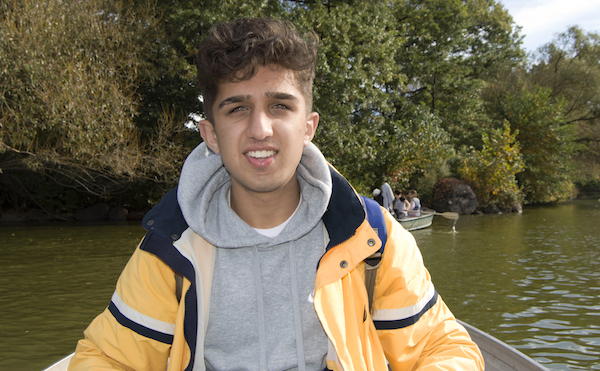 Ateeb Rahman spent part of his summer in the Pre-College Summer at the University of Connecticut.

Why did you choose to participate in UConn’s Pre-College Summer program?

The University of Connecticut has always been a school I have admired. A public college offering the competitiveness of a private college always appealed to me. When I found out about the UConn Pre-College Summer Program, I jumped on the opportunity and not one bit do I regret it. I wanted to see what college was like and the programs offered beautifully depicted an ideal college life. I also wanted to see whether or not I want to major in law when I do go to college. For the purpose of learning about college life, the UConn Pre-College Summer program was very successful.

As a Connecticut resident, UConn was the ideal option for a summer program. I had the choice between Harvard and UConn and I chose to UConn because of all of the praise it received from my friends who had attended in the past years. They told me it was a life-changing experience, and indeed it was. Going in, I had the intention to become a lawyer. I attended the Pre-Law course and although it changed my mind about what I wanted to do, it was very helpful. The entire program inspired me to do something else with my life, something I’m passionate about, because the entire program exuded passion.

What was a typical day in the Pre-College Summer at UConn program?

The first day, I walked in and met with my resident manager, Blake Ma, and he introduced me to the only other person there, Drake Kapoor. Both of them welcomed me as if I had known them my whole life. The rest of the week was mainly spent with the two of them, both of whom I created a indescribable bond with. Everyday, we woke up around 8 a.m. and ate breakfast at the dining hall across from the dorms.

For three hours, we learned about the course we signed up followed by two incredibly fun and inspiring workshops. In one of the workshops, I met Anthony Valentine. Valentine is the one who allowed me to realize my true passion, which resides in music. After the workshops, we were given permission to spend the rest of the day basically as a college student: hanging around, making friends, and purely having fun. In one week of interaction, I made friends for a lifetime.

Spending time with the people there was the most memorable moment of my summer. As I said before, I created unbreakable bonds with the people I met. Never had I known that I could meet people and grow that close to them in one week. Staying up at night to talk and having the freedom to live on a college campus was truly exhilarating.

What advice do you have for teens looking at UConn’s Pre-College Summer program?

Be yourself!! My entire life I have struggled being myself. I always followed what was considered “cool” but never stopped to think if that “cool” look depicted who I was as a person. I decided as I walked through those two metal doors into the dorms that I would be the coolest person I could be and that was me, 100 percent me. The reaction to me being me was overwhelming. Everyone I talked to liked me for me and that was an experience I cannot recreate. UConn’s Pre-College Summer program gave me the confidence I needed going into my junior year and in that one week, I can proudly say that I found myself.