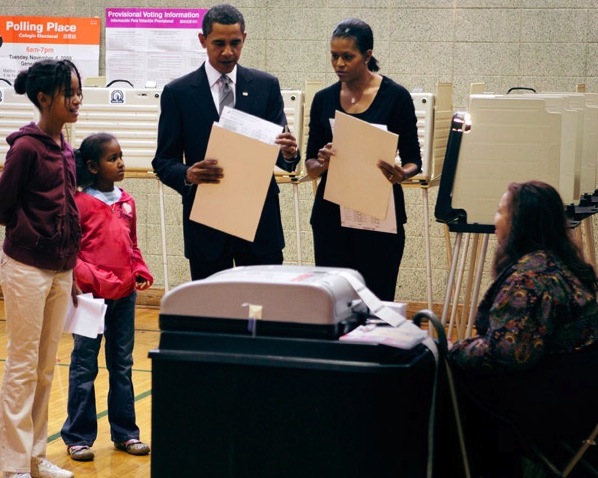 I registered to vote today; I got the sticker and everything. The League of Women Voters was outside the cafeteria registering Seniors, and I was more than happy to take part. Those of you who read my blog regularly already know my views on the Right to Vote, but I thought I’d take this opportunity to talk about the other side of voting: politics.

Last time around in the blog, I spoke about social conscience, and while political conscience comes from a similar place in one’s system of values and actions, it is slightly different, and it is even more heritable. Because, as I wrote, while my connections came from my mother’s work in the environmental sector, my views on the subject where shaped more strongly by information that was given me.

Political views, on the other hand, are usually given from mother and father to their children with little question of informing oneself further. It is not just based on values (as a social conscience is), it isa value. My family is [insert political party here], therefore so am I. End of story. We then take this admittedly arbitrary view and apply it as our primary lens to the media, current events, and eventually elections.

Unless you make a point of searching out opposing news sources, are a news junkie, or actively try to determine your political views, it can be all too easy to shift towards adulthood with these same, secondhand views without question. And much like not having any education – let alone stance – on a social issue is an affront to the fundamental freedoms of speech, expression, and the press, so too is voting blindly an affront to our democracy and to those worldwide and in our own communities who are deprived of it.

And because so many teenagers are being given that precious right to vote as they turn eighteen, it is beneficial for them to reassess their political views as well. Begin reading, watching, and listening to the news more often, and with a more discerning eye. Get your head around the issues you care about, and begin to form your own informed opinion. It can be incredibly difficult to shake your parents’ or area’s views, but try. Political views evolve, and yours can too.

If you’re wary of family political drama, I encourage you to take a look at this wonderful campaign ad run by progressive, Democratic candidate Carl Sciortino during a primary race for the Massachusetts Fifth Congressional District. The ad parodies “coming out” as a Massachusetts liberal to a tea party father. (The ad is also tongue-in-cheek because State Rep. Sciortino (D-MA 34) is openly gay. He did lose the primary, but still serves in the Massachusetts House – and it was one of the best political ads I’ve seen.)

So, once you’ve done the appropriate research, it’s time to formulate a political opinion. Once this is done, you should try to align yourself with a political part. Like it or not, party politics is here to stay, and it’s important to at least attach yourself ideologically with a cause so that you can know where you stand with a certain candidate - even if you don’t check a party box on your voter registration form.

For this, I recommend the Pew Research Center for People and the Press’s Political Party quiz, which was developed during the 2012 Presidential campaign. Check it out and see where you come on the spectrum.

After that, all that’s left to do is vote smartly. So find out where you can get registered to vote today! Information should be available at your school’s Student Services Office or Career Center, and at Town or City Hall. You can also contact the League of Women Voters, which is non-partisan and eager to help men and women alike claim their constitutional right to vote.