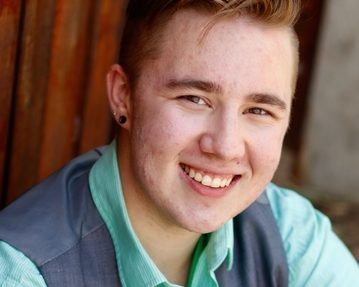 Why did you choose to attend this college?

I auditioned for both acting and musical theatre programs at over thirty schools, mostly American. It all came down to where I would find the most well rounded and inclusive program.

I wanted a conservatory that allowed me to learn as much as I could from as many different acting techniques as possible, and LIPA stood out. I ultimately decided that although I want to pursue musical theatre, LIPA’s Acting degree would give me the acting foundation necessary to stand out.

How did you decide which college and program was right for you?

I chose a program where I knew I would be challenged every day and where I could work on my own individual learning without being forced to fit into a box of what an actor ‘should’ be.

While this was my main condition, I also made sure I was in a location that I would enjoy living in, a school where I would feel safe, and a program that prioritised the actual learning itself over a number grade.

What was a typical day like in your college experience?

It starts with me waking up five minutes before I have to be out the door. Class begins at 9am and lasts two hours and then I grab breakfast from the canteen and have another two-hour lesson before lunch. There’ll be a four-hour scene study in the afternoon.

Around 7pm I meet up with my friend for a private tap class in the city. I’m home for dinner by 9pm. If it’s Friday, I'll go see a show. I’m usually doing schoolwork until at least 11pm and then I like to unwind on Netflix.

What was the most memorable moment of your arts program?

I had the opportunity to share a very difficult story with my class during a lesson in which we were instructed to share a personal monologue. I chose to share the story of the worst day of my life, which was a very traumatic experience for me.

When I finished, my classmates immediately validated my experience and assured me that they were there to support me. I felt like I was a valued member of the community and it made me feel so much safer to be vulnerable around them.

What advice do you have for teens looking at arts colleges?

Don’t go to a program that erases your identity in the name of your craft. As actors, our job is to be a blank canvas in training so that we can absorb and interpret a role onstage, but when you step offstage you’re just you.

You have a life outside of your job, and that distinction is crucial if you’re planning to work full time as an actor. A good program should not take away from who you are.