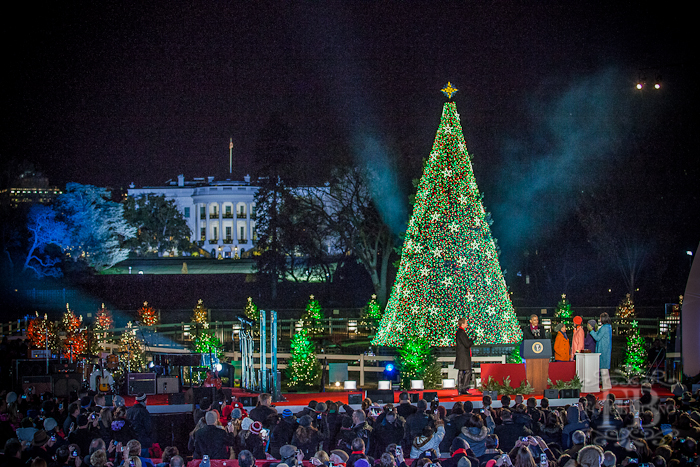 On December 4th when the White House turned on the Christmas tree, something unusual occurred. The lightswere dancing, thanks to the efforts of over 300,000 people, mostly girls, who participated in Google’s Made with Code campaign. The idea was to program the way the lights would dance on the 56 official White House Christmas trees during the lightning ceremony.

Google’s Made With Code Christmas Initiative

Google’s Made with Code is a movement launched in June 2014 to inspire millions of girls to learn to code, and to help them see coding as a means to pursue their dream careers. This year, Google partnered with the National Park Foundation and National Park Service to give girls from across the country the opportunity to bring the 56 holiday trees to life with code.

Girls across the U.S. can experience the beauty of code by lighting up holiday trees in President’s Park, one of America’s 401 national parks and home to the White House.

Beginning on December 2, girls can visit www.madewithcode.com to code a design for one of the 56 state and territory trees. Girls can select the shape, size, and color of the lights, and animate different patterns using introductory programming language and their designs will appear live on the trees.

According to one participant, Brittany Wenger, a student at Duke University, “Each girls’code has a very specific time, down to the ‘exact second.’ Mine kind of starts out blue and turns into a greenish thing and goes like a funnel.” Her skills were first recognized by Google after creating an app to detect breast cancer. She mentioned the White House Christmas tree lights could be programmed by anyone who has access to a computer, but that the program is geared towards and mostly made up of young women. “Made with Code is more of an introductory learning platform to get girls interested in coding so it makes it super easy,” she said.

Girls can code the trees throughout the month of December, and visitors can see and code the designs live in Washington, D.C. The White House trees will continue to add more programs from anyone who submits something throughout the holiday season.

Since 2011, the White House has been committed to encouraging girls to participate in STEM (science, technology, engineering and math). On September 26, 2011, First Lady Michelle Obama spoke at the National Science Foundation saying, “If we’re going to out-innovate and out-educate the rest of the world, we’ve got to open doors for everyone. We need all hands on deck, and that means clearing hurdles for women and girls as they navigate careers in science, technology, engineering, and math."

Supporting girl STEM students, especially in high school as they begin their goals toward college, is an essential part of America’s strategy to take the number one position in education, innovation and technology worldwide. It is also important to the girls themselves as they move into future STEM careers.

Women in STEM jobs earn 33 percent more than those in non-STEM occupations and experience a smaller wage gap relative to men. STEM careers offer women the challenges to engage in exciting areas of discovery and technological innovation. Encouraging your girls in these fields is an important step towards economic success and equality as they become adults in the workforce.

And if you missed the live Christmas Tree lighting event, you can watch on the official White House YouTube channel: