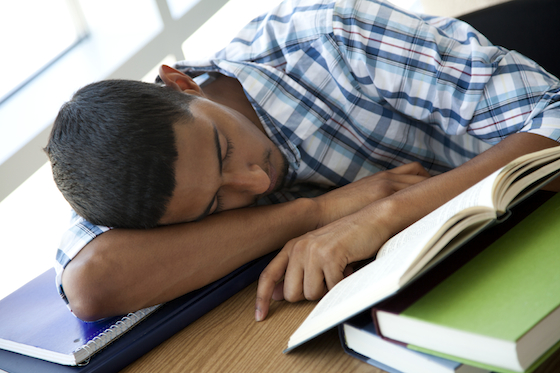 Every weekday morning at 6:35 am, I go into my 17-year-old daughter’s room to make sure she has heard her alarm clock. I usually find her with the covers drawn over her head. I shake her lightly and she groggily says, “I’m up,” followed by, “I’m so tired.” I wish I could let her sleep later, but her bus arrives at 7:05 am for classes that begin at 7:40.

Our situation is fairly common. Most parents of teenagers will agree that getting them up in time for school is a challenge. The reason is straightforward: teens go to bed too late and they have to be up too early. In addition to making them cranky and irritable, lack of sleep can have a wide range of negative effects on teens including emotional, mental and physical issues.

A Push for Later Start Times

One way for teens to get more sleep would be to have school start later. On August 25, 2014, The American Academy of Pediatrics (AAP) issued a policy statement online recommending that middle and high schools delay the start of class to 8:30 am. According to the National Sleep Foundation, teens on average need 9 ¼ hours of sleep per night for optimal performance and health but most average fewer than 7 hours of sleep.

Changing the start times for middle and high schools across the country might seem like a daunting undertaking. It might seem easier to figure out a way for teens to get to bed earlier. But the natural sleep cycle of adolescents makes it difficult for them to fall asleep before 11 pm. A later start time would better align with a teen’s natural sleep pattern and help them to get more sleep.

The National Association of School Nurses and the Society of Pediatric Nurses have both issued statements in support of the AAP’s recommendation for later school start times.

Why Not Advocate Going to Bed Earlier?

Aside from the biological reasons, teens stay up late due to their lifestyle. Heavy homework loads and demanding extracurricular activities make it impossible for teens to go to bed at a reasonable hour even if they want to. Vicki Abeles, director of the movie Race to Nowhere (now available on iTunes), says, “Today 87% of our high school students are sleep deprived for a variety of reasons. Trying to get teachers to give less homework or get coaches to require shorter practices is an uphill battle. Changing school start times for teens is the easier, more practical solution.”

Sleep deprivation can affect learning and performance. Students who get a proper amount of sleep are going to be more focused and engaged in their schoolwork. In 2013, U.S. Secretary of Education, Arne Duncan, said that teenagers are often tired in the morning and could learn more in classrooms if districts started their school day later. Duncan wrote on Twitter, “Common sense to improve student achievement that too few have implemented: let teens sleep more, start school later.”

My own daughter has mentioned that occasionally she finds herself falling asleep during one or more of her classes on days where she stayed up especially late completing homework assignments. Abeles says, “Teens are up doing homework late at night on their computer and studies show that looking at screens before bedtime can make it difficult to fall into a restful sleep.”

Chronic sleep deprivation can also cause a wide range of physical and mental health problems including an increased risk of depression, obesity and exhaustion. It has also been linked to an increase in automobile accidents.

What Parents Can Do

School districts have been resistant to changing the middle and high school start times for many reasons including educational staff contracts, busing problems, and parents themselves not wanting the change due to their own scheduling issues. Some argue that if the start time is made later, teens will just go to bed later, so the hassle and the expense of making the time changes will be for nothing.

But there are school districts that are implementing the AAP’s recommendation regarding later start times. According to School Start Later, Inc., schools in 43 states have made their start times later for high school and/or middle school. Last month, Congresswoman Zoe Lofgren submitted the ZZZ’s to A’s Bill, legislation that asks the Secretary of Education to determine the impact between school start times and adolescent health, well-being and performance.

Abeles says, “It is up to parents and students to start the conversation with their school districts about helping teens get more sleep by starting school later.” Ask the school district to consider later start times for a week- or even a day- and see how the students respond.