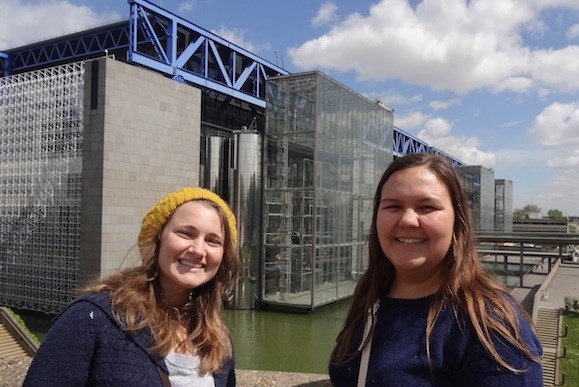 Why is it so important for girl students to study science, technology, engineering, and math?

STEM education for girls ensures that our society benefits from the talents of the entire population. “If we can’t embrace the most basic level of diversity, then we’ve squandered half of the brain power available to us to make the world a better place,” asserts Adriane Brown, President & Chief Operating Officer of Intellectual Ventures, a firm that invests in inventors and innovative technologies. Brown captures the most universally compelling reason the world needs gender equity in STEM-related professions—without females, the field of STEM would only be half complete.

President Obama underscores the importance of participation in STEM-related disciplines for the country’s future, stating, “We simply cannot, as a nation, expect to maintain our run of ingenuity and innovation—we cannot maintain that stream of new and different ideas—if we don’t broaden participation in STEM to all Americans, including women and girls and minorities.” The future of innovation in our nation relies on the full participation of all types of students in STEM.

To Secure Their Personal Future

Beyond macro level benefits, financial security and mobility are other significant benefits for women in STEM-related fields. According to the U.S. Department of Commerce Economics and Statistics Administration:

To Close the Gender Gap

The U.S. Department of Commerce’s report, “Women in STEM: A Gender Gap to Innovation,” reveals that women are underrepresented both in STEM jobs and STEM undergraduate degrees, despite making up nearly half of the college-educated workforce. The report offers no conclusive reasons for the inequity, but supposes that women are underrepresented in STEM jobs because STEM career paths may be less accommodating to taking time off from work to raise a family.

Furthermore, the lack of female STEM role models discourages young women. The U.S. Department of Education documents the equal enrollment of high school girls and boys in science and math classes and the subsequent decline of girls to only a third of college students majoring in STEM fields. The research firm Catalyst tracks women in the workforce and reports a further decline for women in STEM professions, including only 25 percent of hardware developers, electrical engineers, and systems managers. The progression of girls in STEM from high school to college and employment definitely needs to change direction.

Closing the gender gap motivates the highly educated scientist, Connie Chow, in her role as the Executive Director of the Science Club for Girls. The free after-school experiential program based in Cambridge, Massachusetts operates in five cities and is nationally recognized for making a difference in underserved girls’ lives.

Raised in Hong Kong by a single mother in a working-class family, Connie understands the critical importance of mentoring girls. Connie immigrated to the U.S. for college, earning a Bachelor’s degree in microbiology from Brigham Young University, a Ph.D. in virology from Harvard University, and was a postdoctoral fellow in the Department of Immunology and Infectious Diseases at Harvard School of Public Health.

“I see Science Club for Girls as pushing a women’s agenda to find equality in the world,” explains Connie, speaking of her career choice. She elaborates, “Science and engineering have traditionally been viewed, and unfortunately continue to be viewed, as male-dominated activities. Girls get a lot of pressure to go in different directions. Our program helps girls change their mindset about what it is they can do, and who they can be. And that hopefully opens doors for them in science and engineering or whatever direction they go.”

Connie spends her time forging partnerships with educational leaders, convincing universities and businesses to make long-term investments in young people, and mentoring girls. “I find joy in seeing budding student scientists go from the ‘ew’ to the ‘a-ha’ moment,” comments Connie of her hands-on work with girls. She elaborates, “For me, having an appreciation for science and engineering is similar to having appreciation for poetry and art—it enables you to makes sense of the world.“

“When I entered middle school, I chose to take computer programming again since it was something I knew I liked…and I didn’t want to take cooking,” explains Luz of her early STEM trajectory. The daughter of Mexican immigrants, Luz went on to earn a Bachelor of Science in Electrical Engineering from MIT and a Masters in Technology in Education from Harvard Graduate School of Education. Luz stresses the importance of early exposure to hands-on STEM work, “If you walk into our space, you’ll see girls coding, soldering, building electronic circuits, using a 3D printer and power tools. Girls learn by doing. They’re gaining practical in-demand skills for 21st century careers.”

Connie Chow and Luz Rivas are part of a promising movement to engage girls in STEM. In January 2014, the National 4-H Council announced a partnership with STEMconnector and Million Women Mentors to support the engagement of one million STEM mentors to increase the confidence of girls and young women to pursue and succeed in STEM degrees and careers.

Colleges and universities across the country are also implementing outreach campaigns and policies to attract young women into STEM disciplines. Many schools, including Kettering University in Flint Michigan, actively market to female high school students who express an interest in STEM fields. Kettering offers degrees in engineering, math, science and business exclusively. In their outreach to high school girls, the school’s Society of Women Engineers positions engineering as an agent of social change with the headline, “Ready to Change the World?”

Columbia University in New York City, along with their Society of Women’s Engineers Graduate Student Group, hosts an annual celebration of women in science and engineering to inspire females from all backgrounds to prepare for and pursue careers in the two fields. The prestigious Carnegie Mellon University School of Computer Science increased female enrollment from seven to 42 percent in five years through the active recruitment of high school girls, by lowering requirements for programming experience, and by actively addressing the historically male-dominated peer culture of the major.

How Parents Can Encourage Girls to Pursue STEM

While some girls are drawn to STEM fields on their own, others develop interest after a little encouragement from parents and role models. What can you do to get your daughter excited about STEM?

But perhaps the best inspiration for young girls comes from Luz Rivas. She advises, “Try lots of things, explore, and be adventurous. This will help you take risks later
in life.”