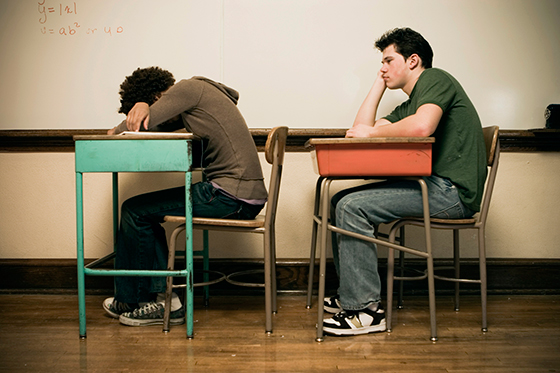 Adolescence is characterised by changes in the chemistry and organisation of the brain, which have profound consequences for overall cognitive development. Any teacher will stand by the truism that many students simply are not motivated in the classroom and just don’t want to be there. One reason is lack of sleep.

There is a rapidly growing corpus of research that asserts that the sleep circadian rhythm changes as throughout adolescence and remains in place once we reach adulthood. For teenagers, the physiological transitions that occur from puberty onwards result in a situation in which it is preferable to go to sleep late and wake late. As a self-confessed night bird, I can totally understand this; some people are morning people but many are not. We all know that if we don’t get enough sleep we become tired, irritable and lethargic. If you are going to school every day, the chances are that come Friday, you are absolutely exhausted. I know that in every full-time teaching job I have ever had, all I wanted to do is flop in a chair for an hour or two and then go to bed before enjoying the weekend. The same can be said for teens.

Whilst teaching in Europe, I had to be on the bus to school by 7am everyday and didn’t get back until 6pm- later if there was a parents evening. In my grade 7 tutor group, there was a student who endured the same punishing schedule and by Friday afternoon had bags the size of suitcases under his eyes. I was always asking for homework extensions from his teachers on his behalf. Although this was an extreme case, his situation underlines how important sleep is to an adolescent.

The reason is biological. The frontal lobe of the teenage brain reorganises its synapses such that connections which worked in childhood are superseded by those that come into play in the teenage years and these changes enable the full holistic development of the human organism. To achieve this, the brain needs at least eight to nine hours of uninterrupted sleep every night. The problem for teenagers and adults is that our scheduled working day starts too early, thus creating a disconnect between sleep and work. This has been acknowledged in the UK.

Some UK schools are piloting plans to start the working day later. Speaking personally, this should be an option across the board. I am hopeless in the morning and often feel nausea if I have to rush to be somewhere early. The same is true of many teenagers. Research carried out by neuroscientists at Oxford University shows a direct correlation between later start times and improved cognisance, conceptualisation and abstract thinking skills-- the same attributes most associated with success in STEM subjects.

There is clearly a long way to go, but in my view if there are sound biological reasons as to why some teens are not achieving their potential and perform better when they can start the school days later, then the option should be there. If there are students who would prefer to be in school from 10am until 5 or 6pm then there will be teachers such as myself who would happily be in school with them.