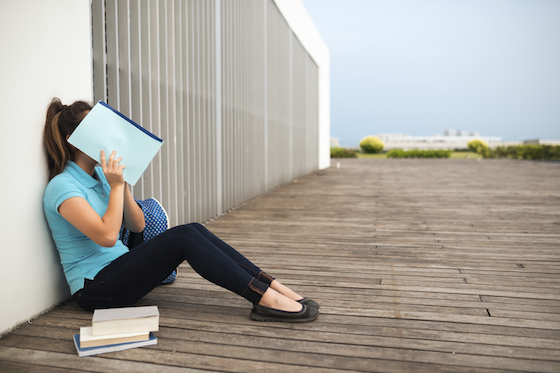 Feeling socially awkward is often debilitating regardless of your age, but for a shy teenager, it can be excruciating. There are often many reasons why a teen might regard social situations with apprehension, and a lot of that is due to feeling inadequate and experiencing negative thought patterns. Here we look at ways you can try to help your teen overcome their shyness, combat destructive thoughts, and become a little more confident.

It’s All About Them

Shy teens often envision the worst-case scenario, such as doing something that others will laugh at, or wanting to participate in something, only to be rejected. Even the most confident of teens are concerned about what others think of them, but for shy kids, it can become all-consuming. This kind of self-absorbed behavior does not occur through vanity of egotism; self-conscious teens really do think everyone is scrutinizing their every move. Helping teens realize that people are far more concerned with their own lives might be all it takes to help them re-think their exaggerated concerns.

Many introverted teens consider themselves unlikeable, boring, stupid or worthless, and this can increase their social awkwardness and shyness. Over time, these crushing beliefs about themselves become a mantra, developing into a continual cycle of negative thoughts that become very difficult to break. Shy teens may not even be consciously aware of their thought patterns.

However, if they are given help to sit back and evaluate their destructive thinking, and they are shown how damaging it is to their self-esteem, they are one step closer to viewing themselves in a more favourable light. One way of doing this is to ask them what they would say to a friend who voiced similar negativity about themselves; getting them to see the situation as a third party can often jolt their awareness, so they are able to see how tough they are being on themselves.

Some teens are naturally gregarious, and more reserved kids might look on in wonder, wishing they could also be the same. Shy teens envy the social-butterfly, while they cringe at the thought of having to interact with others. They may feel pressure to act in a similar way to be accepted, or fit in; timid teens often keep up pretences and act in a way they believe is necessary to be liked.

It is crucial they know that it is much more important for them to be themselves. People can sense an insincere person a mile off, and are unsurprisingly more drawn to those that are natural, and also aware of (and able to show) their weaknesses. Additionally, teens need to know that everyone makes mistakes and that nobody is perfect (even if some of their school friends might outwardly seem that way).

Help Them Work on Their Social Skills

Socially awkward or shy teens need a little training in how they should appropriately act in the company of others. While this comes very easy to some, shy kids often have a hard time knowing how to behave (or worrying that they are sticking out like a sore thumb), finding something as simple as having a short conversation with a stranger totally excruciating.

Help explain social niceties, giving them ideas on the subjects they could chat about, for example, if they are at a party with people they don’t know. Having subjects planned in advance will help prevent their mind from freezing, decreasing the possibility of mind-numbingly embarrassing pauses in conversation, which only increases their apprehension.

Your teen might find this incredibly difficult at first, but repetition and training are key. Sometimes it helps to focus away from their social group, and to practice on strangers: encourage them to get chatting to the cashier at the grocery store! When your teen gets into the habit of casually starting, and engaging in, simple conversation, it will soon feel a lot more natural and spontaneous for them.

As humans, we are naturally drawn to confidence, and we are more likely to make a bee-line for those that project self-assurance. However, it might surprise your teen to realize that many people they think are super sure of themselves are actually faking it! Acting in a confident manner can make you feel more self-assured, so get your teen to try it!

Additionally, shy teens often struggle with social interaction because they are so engrossed in what they are doing wrong. A great tip is to get them to shift the emphasis onto the person they are speaking to; tell them to concentrate on what the other person is saying and doing, as this will stop a shy teen focusing on their own faults.

Another great way to build confidence is having the ability to laugh at yourself. Insecure teens are often so serious about any mistakes they make; however, if they can learn to laugh about it, and then shake it off, it lessens the severity and enables your teen to put things in perspective. Life is a learning curve for us all, and teens need to understand that the world is not going to crumble if they make a silly faux pas!