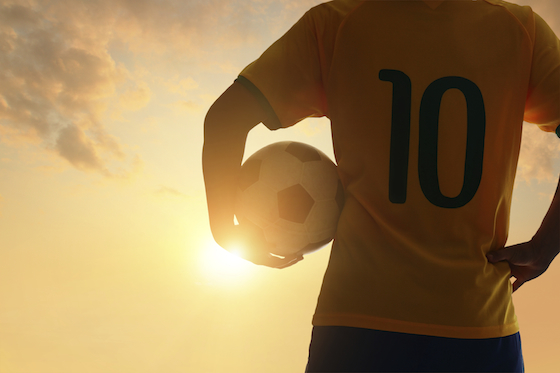 My daughter played soccer in our recreational town league from the time she was five years old. When she entered high school she decided to try out for the freshman team. She loved playing that year and especially enjoyed the camaraderie of being part of a team in such a big school. In the off-season and during the summer she met with a trainer who worked really hard to improve her skills. The following year she tried out for the junior varsity team and was cut by the coach before the season started. She was crushed.

As a parent, I always want to be supportive of my children and encourage them to work hard to achieve their goals. I knew there were many talented teens trying out for the team, but I hoped that her positive attitude and effort would yield the results she wanted. Unfortunately, sometimes that does not happen and it's hard as a parent to see your child disappointed.

Whether it is a dream of playing professional sports, attending a certain college or being a Broadway star, how can parents support their teen but also manage their expectations?

Don’t Define a Teen by Their Activity

Catherine Steiner-Adair, Ed.D. and author of the book, The Big Disconnect, says, “Always remind your child that you are not solely defined by what you do. For example, when you introduce your child, don’t say, ‘This is Johnny, he’s our soccer star,’ but rather, ‘This is Johnny – right now he really loves soccer.’”

By making this distinction, parents encourage their children not to define themselves by a singular talent or activity. This is important because as they get older, they may tire of a sport or activity or their goals may change or they may not continue to excel. In the case of my daughter, she was left sophomore year asking herself, “Without soccer, who am I?”

Encourage teens to be involved in more than one activity or hobby. Allow teens to evolve and discover new passions as they mature.

Be Supportive but Realistic

Kate Roberts, Ph.D. and parenting coach, says, “In former Yankee player Derek Jeter’s autobiography, he writes that from an early age he told anyone that would listen that he was going to play professional baseball. If the adults in his life had told him that was not going to happen, that would not have been helpful. Parents should not push a kid that doesn’t have talent but they also shouldn’t discourage a kid who has a dream.”

There is a difference between believing in your child and being unrealistic. Says Steiner-Adair, “Chances are there is someone better than your teen at their activity or sport. But that doesn’t have to be bad thing. Teens should be really excited that there is someone they can learn from.”

Make Sure You Know Whose Dream it Really Is

Parents today put a lot of time, energy and money into many of their teen’s pursuits. Many teens see how devoted their parents have been to them and worry that they will disappoint their parent if they are not successful.

Keep the lines of communication open. Lisa Sohmer, Director of College Counseling for The Garden School says, “Sometimes kids don’t realize the challenges or obstacles they will face. They need be able to change their minds without having the pressure of being labeled a quitter by their parents.”

The Importance of Perseverance

Sure, it looks fun to star in a Broadway production. But it is also takes a lot of time, effort, determination, sacrifice and luck. Says Roberts, “Today’s teens can be very image-focused. It is important that they understand what is behind the image. They can’t expect to achieve their goals without hard work and dedication.”

Be honest with a teen about why the path they are choosing may be difficult and the odds of success may be low. If they understand and are willing to do the work and make the sacrifices required, encourage them to go for it! Roberts says, “The outside world will give a teen feedback and let them know if their goal is unrealistic. For example, a teen may not have what it takes to make a living as an actor but that does not mean they couldn’t pursue it as a hobby if it is something they are passionate about.”

When One Door Closes …

Obviously for Derek Jeter, the dream of playing baseball for a living became a reality. But even if a teen does not achieve their ultimate goal, time spent pursuing a passion is not wasted. For my daughter, after she got over her disappointment, she realized that not playing soccer left her a lot of free time to pursue other interests. She found new activities in high school such as running track and being president of her youth group. Her time playing soccer taught her valuable life lessons about teamwork, sportsmanship and dealing with disappointment – all of which are transferable life skills.