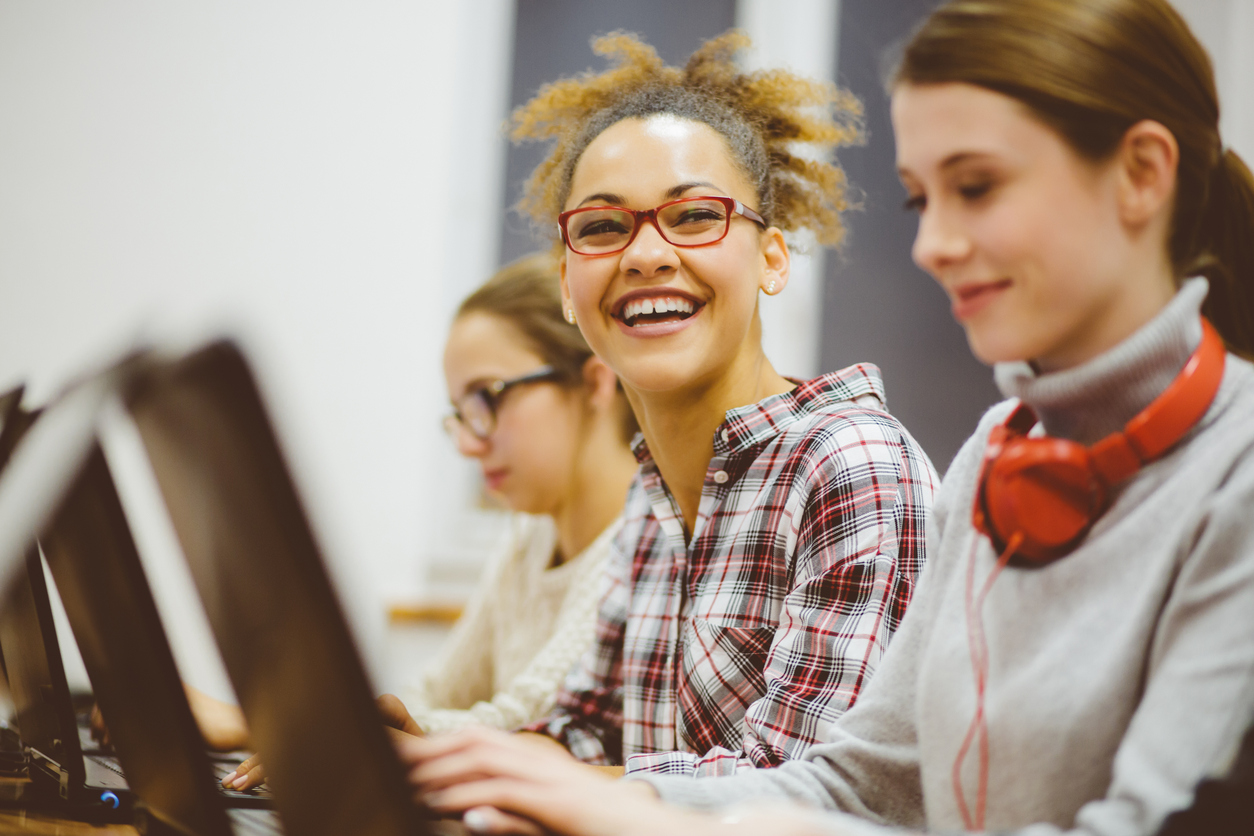 Far more men than women major in the computer sciences, and Gloria Childress Townsend, professor of computer science at DePauw University in Indiana, thinks she knows why.

“Ask a young girl to draw a computer scientist, and she draws a male caricature dressed in a white coat and wearing thick glasses,” she said. “There isn’t a clear, accurate picture in the media of the types of IT careers one can have that involve people and engaging ideas.”

Women miss out when they don’t consider majoring in computer science, she said. “Young women can take any interest – art, business, health services, to name a few – and combine that interest with computer science and a career is born.”

Throughout the 1970s and into the mid-1980s, the number of women majoring in computer sciences grew every year. In 1984-85, women earned 37 percent of those degrees. Then, just as home computers were becoming more common, things shifted. After declining almost every year, women accounted for just 17.6 percent of computer science degrees in 2010-11, according to the federal National Center for Education Statistics.

Many colleges and universities have taken steps in to reverse that trend.

Outreach is the Key

Lana Verschage, director of Women in Computing at the Rochester (N.Y.) Institute of Technology, said the number of women in her school's incoming class has nearly doubled since she started in the position in 2014. Outreach is the key, she said.

“To increase the pipeline of young women, we need to expose them at an early age, because computing is not a required course in high school, like English or social studies or math,” she said.

RIT hosts a Girls Soaring in STEM Fair for students in kindergarten through grade 12, a “hackathon” for grades 3 through 12, and a Girl Scout Tech badge day where RIT students teach local girls web design and digital movie-making.

“The girls can be in a room with all other girls, which isn't typically the case if they were to take AP computer science in high school where the majority of the participants are men,” Verschage said.

Part of the responsibility for increasing the number of women studying computer science belongs to a college’s admissions department, Verschage said. “It’s not necessarily looking at whether they have AP computer science, as an example, but looking for students who are strong all around, not just in academics but in leadership skills.”

Building a Sense of Community

Women were among the earliest pioneers of computing, said Sibel Adali, a professor in the department of Computer Science at Rensselaer Polytechnic Institute in Troy, New York, where faculty try to build a sense of community among female students. RPI strives to make the computing culture more inviting and to lower the barriers to entry, she said.

“We have flyers busting common myths that we distribute to prospective students, backed by our own data,” she said. “Not only do half the students in our introductory classes have no prior programming experience, there is no difference in performance between students with or without prior experience. The main thing that seems to make a difference is the effort students put in.

“Our hope is to have the best and brightest individuals working on computing problems of today and tomorrow. If we are only attracting professionals from a segment of society, we are not drawing from the best and widest pool of talent.”

Diversity in any field leads to better problem-solving, Verschage said.

“As an example, back in the day men created the seatbelt,” she said, but they soon discovered that the prototypes wouldn’t fit a woman’s figure. “Without that perspective, you're missing 50 percent of your population.”

With a predicted shortage of IT workers to fill future jobs, said Townsend, “It makes no sense to eliminate half of the potential pool of workers.”

Townsend received funding from the National Science Foundation to support Celebration of Women in Computing conferences across the country.

“I dreamed that one day there would be a celebration within driving distance for any woman in computing, so that she would always have a community where she felt welcome, along with access to role models, accurate information about computing careers, mentors and networking opportunities,” she said.

Ibrahim Baggili, assistant dean of the Tagliatela College of Engineering at the University of New Haven, said his commitment to recruiting women to computer science programs grew when the first of his two daughters was born four years ago. He is working on a program on cybersecurity for the Connecticut Girl Scouts and runs a coed cybersecurity camp during the summer for teens. He ensures that the presenters include women.

The focus in computer science, he said, needs to be less about technology and more about helping people.

“Maybe you're learning about programming and networks and systems, but at the end of the day you might be saving people’s lives,” he said. “If you're working for the military and you're protecting critical infrastructure, you'll be helping people make sure that they have water.”

Computer science leads to interesting careers and job security, said Townsend. Her former students work in the film industry, for game design companies, in educational institutions, in graphic arts businesses and as IT consultants, among other things.

And, said Verschage, hours are flexible and salaries are high.

“Whether it's medical, financial or the Department of Defense, you can choose whatever field you want,” she said. “You've got the world at your fingertips.”