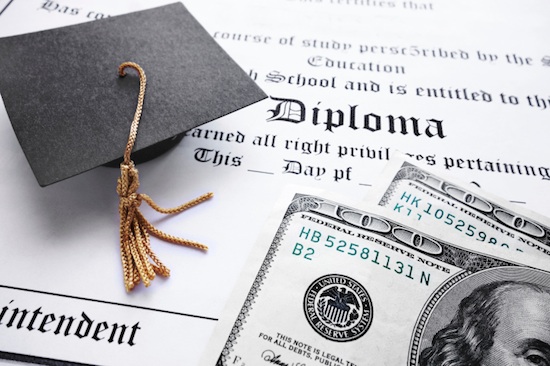 I suppose that I'm what you could call a financial isolationist. Within my own bank account, I'm pretty competent and things tend to run smoothly. But when it comes to outside concepts like mortgages, lending, and – goodness gracious – the Stock Market, my understanding drops off significantly.

Maybe it's because I'm not much of a math person, but beyond the basic concept of getting and then paying back money (with interest), I get a little confused. It probably has something to do with my penchant for trying to ground things in reality; all the intrinsic theoreticals of the financial sector don't click in my brain very well.

Fortunately for all of you, I chose Journalism, not business, and you won't see me accidentally running the market into the ground any time soon. But, as a soon-to-be college student taking out federal student loans, I represent a major component of our nation's economy – and a portion that ought to know exactly what it's doing.

According to a recent paper by the Brookings Institute (and reported by The New York Times), the percentage of households with people aged 20 to 40 who have educational debt rose from 14 percent in 1989 to 36 percent in 2010. The paper's authors suggest that this is explained by more people obtaining higher education and, beyond that, more people studying for advanced degrees.

The paper goes on to argue—with evidence—that student debtors are "no worse off" then they were decades ago and that recent media portrayals of college graduates with gargantuan student loan burdens are exaggerated.

Agree or disagree, the aforementioned statistic goes to show that those with student debt represent a major portion of the U.S. Economy. I argue that if so many people are involved in such a system, then it ought to be as airtight and free of confusion as possible.

The U.S. Department of Education (ED) has attempted to make sure this goal is reached. Unfortunately, they have not even come close to streamlining the process enough to make a noticeable dent in its understandability.

Those of you who have applied for student loans like I have know that ED requires a student to complete an online Financial Awareness counseling "course" before proceeding. This is to help ensure that all student loan-takers know what they are getting into, what they are heretofore required to do, and what can happen to them if they do not do what is required.

Not only does this cover ED's liability to those who might claim they did not understand their loan, but makes an attempt to educate the loan-takers well-before their debt becomes reality. It's an important step.

But it would be a lot better if the language explaining the system wasn't something only a CPA could hope to fully understand.

My father—a college graduate and (possibly more pertinently) a mortgage-holder himself—and I spent just about an hour going through the inscrutable yet repetitive motions of the Counseling. We spent even more than that reading and signing the Master Promissory Note itself. (That is the document through which the loan is processed.) Loaded with fine print, the Note is one of the densest things I've ever read.

I'm an educated person. I'd like to think I'm decently smart. But now, a month or so after completing the ED page, I doubt I could coherently explain the process to any of you.

And I'm not alone.

A Lack of Understanding

Recently, The New York Times Magazine printed a cover story by Adam Davidson about how freelance photographer Damon Casarez was chronicling recent college graduates' struggles with student loans through compelling portraits. In one of the interviews (conducted by Taffy Brodesser-Akner) that accompanied the piece and photos, student debtor Alexandria Romo, 28, of Austin, Texas, who has $90,000 in student loans, decried her lack of understanding when she had taken out the loans years before.

"I feel like I had no idea what I was doing," she said in the article. "They didn't really sit us down and talk to us about financial aid or what our options were."

"I wish they would have a class before you graduate high school ... about basic student loans," she continued, going on to explain her blind agreement to a high interest loan that could've been prevented with more financial instruction.

Ms. Romo's predicament is by no means unique, and while her amount of debt may be on the highest end of the spectrum, the concept of entering into hideously complex student loan agreements without sufficient explanation (for the sole reason that school is completely unaffordable without them) is very wide-ranging.

To ensure that all loan-holding students have a more complete knowledge of the debt they are taking on, we as a society have to be smarter with student loans.

The paperwork surrounding the loans should be simpler and more accessible to all students—not just those who are aspiring accountants! Professionals and students from all over the country have ideas on how to make this simplification happen. One thing remains true, though: change will need to take place on all sides.

The Department of Education needs to drastically simplify its counseling language without making it mindless. That is to say, we should be able to learn from it without being overloaded with information and reduced to mimicking language to find the proper response. Maybe they could make a series of videos on student loans. In today's digital culture, I wouldn't be surprised if ED's Counseling process could be better represented in a Buzzfeed list ("27 Things You Need to Know About Paying for College"—I can see it now).

In school, there should be some sort of class like Ms. Romo mentioned in Times Magazine. TeenLife Media is an advocate of high school financial literacy courses, and that type of curriculum could certainly highlight the process, perils, and perks of federal student loans.

At home, students and their parents simply need to take this hypothetical new information to heart and think critically about the pros and cons of taking loans, and just how much to take. Quick, free-for-now money can be tempting for families looking at increasingly enormous college bills, including my own household. We need to limit ourselves if we can and try to think of the long-term consequences and realities of what we do now.

So as you look forward to college and navigate through the student loans process, be careful, be vigilant, and good luck. It's a major hurdle, but if we all come together as educators, students, parents, and policymakers, it's a hurdle we can collectively overcome.