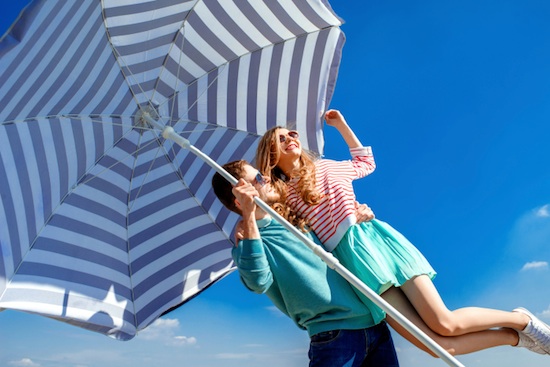 The infamous song “Summer Nights” from the 1978 movie Grease sums up the allure of a summer romance—especially for teens. In the movie, Danny meets Sandy at the beach and they spend the whole summer together hanging out and falling in love. But it turns out their summer personas are very different than who they are during the rest of the year. When sweet Sandy starts attending cool Danny’s high school, the romance seems doomed.

But by the end of the school year, Danny and Sandy have found their way back to each other. While in ‘reel’ life, true love endures—what happens to summer romances in ‘real’ life and how can parents help their teens cope with the end of a summer romance?

What is Different About Summer Romances?

Andrew Smiler, PhD and author of the book, Challenging Casanova: Beyond the Stereotype of the Promiscuous Young Male, says, “There is something unique about summer romance. Teens aren't bound by the social rules of their school and school-based peers. They have more opportunity and ability to step outside the niche they usually fill. Many have more time (& often with less stress) to spend with their sweetie.”

As is the case with the fictional Danny and Sandy, summertime personalities can be different. Teens may feel a freedom that they don’t feel during the school year because they are with people that don’t know them. Smiler advises, “Teens have a greater ability to not be the person everyone thinks they are. In the case of fictional Danny, he can be a nice guy instead of a greaser at the beach because there's no one there he knows, so he doesn't need to maintain his reputation. You might call that experimenting with a different role or identity.”

Being in a different setting than home/school may also play a role in summer romances. Adolescent psychologist, Dr. Kate Roberts, says, “Summer romances tend to involve a discrete period of time away from the typical environment of every day life therefore they are less threatening and less commitment oriented.” Adds Missy Ruddick, Director of Camp Timber Tops in Pennsylvania, “Eight weeks at camp feels like two years at home. You only have a select time to be together, so it is all about quality time.”

Intensity of a Summer Romance

Roberts adds that in general, more partying that occurs during the summer. Says Roberts, “With partying comes summer romance. It tends to go hand-in-hand for teens these days. I see a lot of teens who begin hookups and summer interludes with the presence of alcohol.”

Helping Teens Deal with the End of a Summer Fling

For some teens, the finite time of a summer romance is exactly what makes it alluring. They may not want to be in a relationship during the school year and like that they no longer have to see or interact with their summer fling. And while today’s technology can help extend a summer romance, Smiler points out it can also be the reason it ends (finding out more information, seeing pictures online of your summer sweetheart going out with other people, etc.).

Whether a romance just cools off as the fall approaches or there is a conscious decision to break up, the end of a summer romance can be hard for teens to handle. These sad feelings can be compounded by the end of summer blues—the thought of returning to regular life and the pressure that accompanies it. Smiler says, “As with school year relationships, it is a parents' job to be available to hear their children's stories and pain, offer what comfort they can, and talk through the hurt.”

Roberts suggests parents help their teen to understand that relationships and romances, especially in the summer, can be fleeting. She continues, “I think parents need to prepare their teenagers more than ever for how to handle themselves with the opposite sex. Despite the fact the trend is for open sexuality, parents need to step in and let teens know that regardless of what teens think, getting physically engaged with somebody is a commitment and it can feel bad when it ends abruptly.”

Although a summer romance may end in heartbreak, these experiences teach teens to be resilient through life’s many ups and downs. In addition, meeting someone and sharing a special time together does not have to result in a long-standing relationship for it to hold a special place in a teen’s heart. Ruddick says, “Having a summer romance and then having to leave it is always hard. But I think it is one of life's moments that you can look back at with great memories.

There is Always Next Summer

Not all summer romances have to end.

Ruddick herself is a big believer in the power of a summer romance. In the summer of 1997 when she was a unit leader at camp she met Andy, a unit leader at the brother camp. Ruddick recalls, “We had a wonderful time that summer. We knew it was something special, but he was from England, I was from Florida. Then we both went home to dating other people.” But by that December, Andy realized that their romance was more than a summer fling. They decided to return to camp and see what happened. The got engaged in the summer of 1999 and both camps had a beautiful campfire in their honor. The Ruddicks have been married for 14 years, have two amazing children, and together they direct Camp Timber Tops.