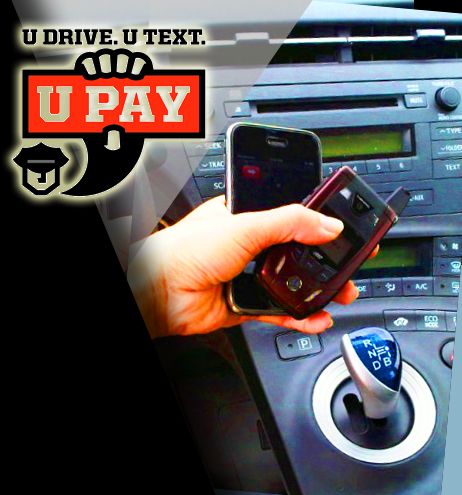 That’s the theme of a much-needed TV commercial created by the United States Department of Transportation (DOT). It is a commercial every teen and every driver should pay attention to.

Chances Are Your Teen Texts and Drives

The huge number of teens who drive while distracted by their cell phones is frightening. Distraction.gov, a National Highway Traffic Safety Administration (NHTSA) website, reveals the startling statistic that more than 70 percent of teens and young adults have sent or read a text while driving.

According to the Center for Disease Control (CDC), 69 percent of drivers in the United States report that they had talked on their cell phone, and 31 percent had sent or read text or email messages while driving. Finally, a Pew study cites that 42 percent of American teens say they have been in a car when a driver used a cell phone. Whatever the exact percentage of teens and adults who text and drive, any percentage is too high.

Resist Temptation and Save a Life

Every single driver knows too well that they should not text and drive. But statistics confirm that it is a temptation hard to resist—especially for teens whose cell phones are often their social lifelines. Without years of experience behind the wheel, young drivers must resist before they injure or kill themselves, friends, or other drivers. The NHTSA reports that in 2012 alone, 3,328 people were killed due to distracted driving crashes.

You are Not Invincible

The DOT’s powerful new “Don’t Text and Drive,” targets teenagers and young adults. The graphic commercial labeled, “U drive. U text. U pay” with the hashtag “#justdrive,” aims to shock teens into understanding the fatal consequences of texting and driving before they or someone they know is involved in a distracted driving accident.

WCVB TV of Boston reported on the commercial, stating, “The extremely jarring scene unfolds as the car flips over multiple times before coming to rest. In perhaps the most poignant scene, a police officer stands beside the wreckage and explains, ‘Nobody likes to be stopped by police, but if I’d seen her texting while driving and given her a ticket, it just might have saved her life.’ The shocking images are meant to jolt teens into understanding the reality and consequences of texting while driving at a point in their lives when they may feel invincible.“

Legislation, Peer Pressure, and Adult Roles Models—Part of the Solution

The majority of U.S. states and territories have banned text messaging for drivers of all ages. Twelve states, D.C., Puerto Rico, Guam, and the U.S. Virgin Islands also prohibit the use of hand-held phones for drivers. Legislation is part of the answer. Peer pressure is also crucial to changing behavior. In fact, the new commercial encourages students to sign a pledge to refrain from using a cell phone while driving. Parents must take the lead as role models and put our phones out of sight and reach while driving. And, last but certainly not least, be sure to show your teens the DOT’s jarring commercial. A video is worth a thousand words.