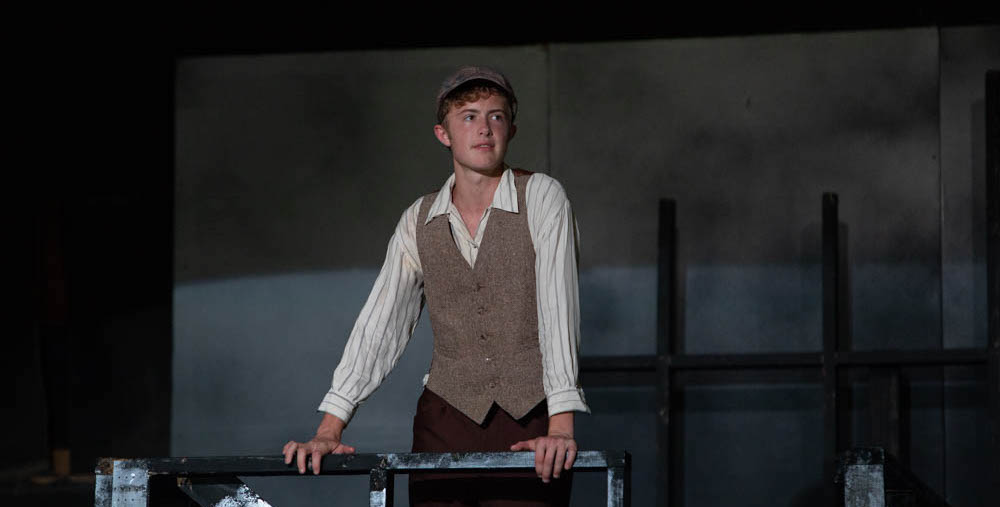 The point in my life when I chose to go to French Woods Festival of the Performing Arts was the point in my life when I started thinking about theater as something serious, a professional career rather than just a hobby. I was 13 years old, in seventh grade. I had done mostly community theater shows and a few professional shows at a local regional theater, Broadway Palm Dinner Theatre.

My love for the art was growing and growing; I wanted to be in a show all the time, every second of my life. My mom, who has always been the most supportive “momager” I could ever ask for, noticed this. She had asked me many times if I wanted to go to a summer theater program, but I was never too into the idea of going away from home for weeks on end. Nonetheless, I was reaching a time in my childhood when I wanted to grow up, to get out, to meet people and get involved in things. And that’s when the brochure for French Woods came in the mail.

I wasn’t going to go to a “normal” camp. I just wasn’t. I had gone to another camp when I was much younger, and it was a great summer camp, but the environment and the sports-centered traditional activities just weren’t for me. I always had mixed feelings when hearing about programs like Interlochen and Stagedoor, summer camps that are totally immersive in the arts.

In seventh grade, I was too much of a homebody to leave home and only do theater, all day long, for weeks (although at this point in my life, as an 11th-grader, that is exactly what I want to do). So the second I learned about French Woods, I fell in love. It looked like heaven. I could be immersed for three weeks, in everything that I loved and forget all my worries of the outside world. I could design my whole schedule to do as much or as little music and acting as I wanted, and I could also try completely new things that I’d never heard of before.

What was a typical day in your summer program or at camp?

“Action-packed” would be a gross understatement. Breakfast is at 8, with the whole camp together in two dining halls. You have about a half hour of time from 9 to 9:30 a.m. to get ready for the day and clean the bunk, and then it’s go-go-go from 9:30 to 5 (with a lunch from 1 to 1:45 p.m.). “Majors” are activities you commit to doing every day for the whole three-week session, and “Minors” are periods you pick each day before breakfast. You may do the same minors every day if you so choose, or you mayparticipate in a completely different minor each period for the whole session; it’s totally up to you.

My day this past summer was intense: I had show rehearsal for three hours, then a Men’s Technique dance/exercise class for an hour, then after lunch I danced for 2 ½ more hours and had an hour of Cabaret Troupe rehearsal. Some of my friends’ days were just as intense as mine, and some of my friends had totally lax schedules, filled with periods of waterfront and arts and crafts. A French Woods day is whatever you make of it.

Attempting to boil down my French Woods experience down to one “memorable” moment would be an impossible task. So many moments affected me and were memorable in so many different ways.

Performing the lead role of Jack Kelly in “Newsies” was most certainly one of these moments, as it entailed a mountain of responsibility along with one of the most immersive and creative experiences of my life. Having the opportunity to close the first act with my solo “Santa Fe” was magical and transformative for me as an actor.

And nothing comes close to those moments sitting with my best friends, tired and sweaty after a Cabaret Troupe show at another camp, on a long bumpy van ride. Those moments spent spread out on blankets on damp grass on a cool July Fourth night watching the fireworks go off. Those moments spent rehearsing that one lift over and over again with my dance partner, and the joy and surprise in both our eyes when we finally nailed it. Those moments spent out on the bunk porch, talking with my two best friends in the world until 3 a.m. because it’s the last night of camp and we’re about to retreat back to our separate parts of the world for the next nine months. It’s everything and anything about French Woods that’s the “memorable” part.

Do you what you want to do. Even if you’re trying to pursue something specific, don’t get dragged onto the band wagon that says you have to conform to a specific type of person who does a specific type of program in order for a college to like you. Also, talk to people. Websites are informative but the best way to get a feel for what a program will be like is to get on the phone with someone who’s done the program or who works at the program. Finally, be open to meeting new people. Don’t be afraid to venture into doing something none of your friends are doing. The more connections you make and the more you discover about the world early on, the better equipped you will be to tackle the college process and high school life in general.