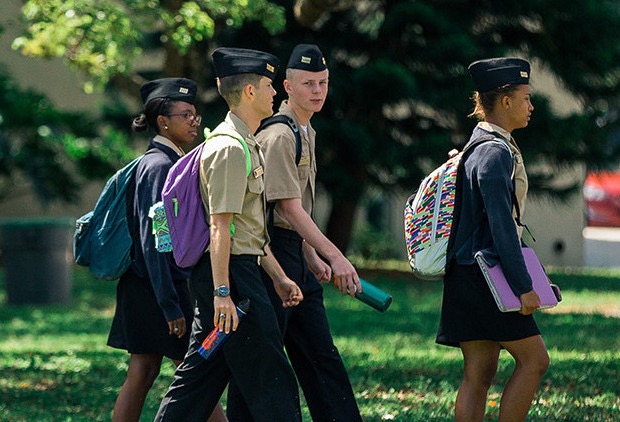 “There were rules to abide by with demerit consequences,” says Ashley, class of ‘02, who now handles government relations for a clean energy company in Washington, D.C. “For example, black socks were required while in uniform. I initially thought this was totally arcane and with open defiance I wore leopard print socks resulting in two demerits. I was infuriated. But I never got another demerit after that. It was a lesson learned: Details matter, sometimes even for … socks.”

Farragut, a private, co-ed military-style school in St. Petersburg, Fla., is named after the first United States Navy admiral and has about 450 students in grades pre-K through 12. Besides being a college-prep boarding high school, the Upper School is known for its programs in aviation, marine science, scuba and sailing. The school also offers a Naval JROTC program.

Ashley started at Farragut at age 12 as a boarder, although she lived just across the bay. Her parents traveled quite a bit so boarding school was a way to live away from home but stay nearby. She graduated in 2002 and went on to get her bachelor’s and master’s degrees from Boston University.

She learned several college-prep skills at Farragut, which helped her be prepared for college.

And her No. 1 was learning to manage her time. She said the structure at Farragut gave her a framework to handle the unstructured time at college.

“College has these intense periods of back-to-back classes and then days of wide-open spaces – and the ‘free’ time has to be managed or you could be all over the place,” she says. 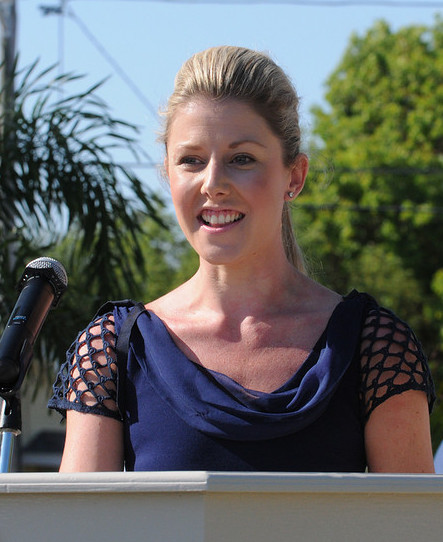 Her leadership roles at Farragut also taught her about managing stress. Her senior year, she served as Battalion Commander, which was the highest ranking student. “At times it was hard to be in that type of leadership role among young peers,” she says. “But I learned to never quit on myself or others, and to manage stress through action and positivity.”

And Farragut also gave her a less-obvious advantage: “I think Farragut gave me many opportunities to apply myself and in different ways. ...I graduated Farragut with a sense of ‘I can.’ Maybe that’s less of a skill and more of a mindset, but either way it’s a great underpinning for college.”

By 2013, Ashley was back at Admiral Farragut Academy as the commencement speaker for graduation. During her speech she said, “It’s the people, I find, that make Farragut most special. The timeless professors and administrative staff who were there when I started in the mid-’90s and who are still there today…, the alums I see at homecomings or in Downtown St. Pete when I visit Florida in the fall…, the friends I met during seventh grade that I still stay in touch with, and now the new Farragut friends I’ve made. This is the good stuff in life.”

Farragut’s class of 2017 had 74 students, all of whom were accepted to college, including schools like Duke and Princeton universities, Embry-Riddle Aeronautical University and the U.S. Naval Academy. Seniors received over $5.4 million in scholarships.

Ashley knows they had the opportunity at Farragut to gain the skills they need for college. And she knows they graduated with something more, as well.

“Farragut was like living seventh to 12th grade in Technicolor,” she says. “There was so much going on and it was awesome. … There was the typical stressful teenager stuff of course, but Farragut gave me a very layered and meaningful experience that was full of fun times and wonderful people.”

Learn about how Farragut can help prepare you or your child for college: Complete the online inquiry to start the conversation.