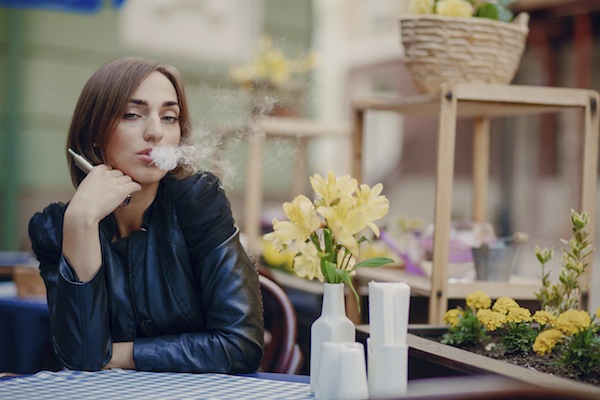 Electronic cigarettes are big business. Touted as a solution to kicking the smoking habit for good, they are everywhere these days. However, it is not only seasoned smokers who are interested in e-cigarettes: research shows that teens, especially those who have never smoked a conventional cigarette, are often just as inclined to use them.

What is an E-Cigarette?

At first glance, E-cigarettes look pretty similar to their traditional counterparts, and are manufactured by large tobacco companies. They are battery-powered, designed to be “smoked” in the same way as regular cigarettes, but producing a mist rather than smoke. Generally, they incorporate a heating element which vaporizes a liquid made up of variable ingredients, but usually containing nicotine, combined with propylene glycol and other flavorings.

Although routinely publicized as a safer option to cigarettes, there simply isn’t enough evidence to substantiate this either way; e-cigarettes have only been on the market for a relatively short while, and there is also a huge variance in the types of product on sale.

Although in adults, e-cigarettes are predominantly used to try to kick the smoking habit, this is not the case with teens. According to a study by the Centers for Disease Control and Prevention (CDC), which was subsequently published in the journal Nicotine and Tobacco Research, more than a quarter of a million middle and high school children had used e-cigarettes in 2013, despite never having smoked a conventional cigarette. This figure is staggeringly three times higher than in 2011.

Increasingly worrying is the CDC’s research findings which highlight that out of the teens who had tried e-cigarettes, 43.9 percent said they “had intentions” to use conventional cigarettes within the next year. For teens who had never used e-cigarettes, the figure was significantly lower, coming in at 21.5 percent.

Why are E-Cigarettes a Cause for Concern?

A huge concern is that at present E-cigarettes are not regulated, and in some states, it is permissible for teens to purchase them in a number of establishments. They are also freely available to buy online.

Although e-cigarettes are hyped as being a less harmful alternative to conventional cigarettes, the fact still remains that they contain nicotine, a highly addictive substance, which could lead to teens smoking more potent cigarettes, with as many as three out of four teen smokers continuing on to adulthood.

However, more worrying where teens are concerned, is that nicotine can seriously impair brain and cognitive function in young, developing brains, with long-lasting deficits. In addition to this, the World Health Organization lists a ton of other worrying side-effects, including shortness of breath and lung problems, stating that teens who smoke were more likely to go on to use serious drugs like Marijuana, participate in risky behavior, and to see a physician for or either a psychological or emotional problem.

There is every chance that E-cigarettes have slipped under your parental radar. Even if you are aware of them, it is likely that their potential seriousness has escaped you. If so, you are most certainly not alone; it’s time to get educated about the possible, long-lasting side-effects they bring along with them.