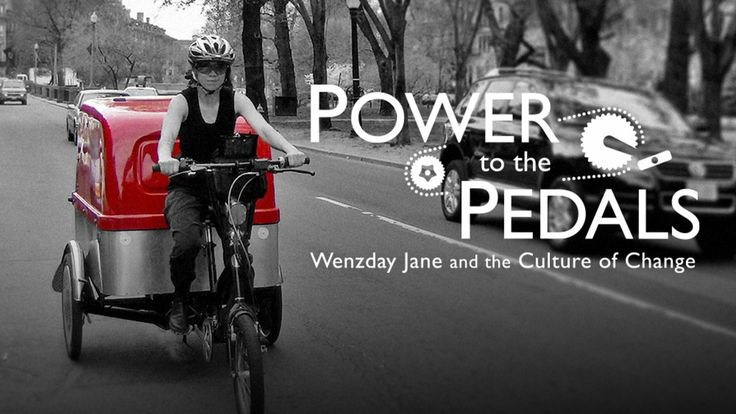 Recently, I went to see Power to the Pedals: Wenzday Jane and the Culture of Change,a wonderful new documentary film about one of Greater Boston’s most innovative business owners. Wenzday Jane is the President of Metro Pedal Power, a Somerville-based delivery business that uses bicycles (and sophisticated, homemade trailers) to deliver goods (mainly produce) throughout the Cities of Boston, Cambridge, and Somerville, and the Town of Brookline.

The film also features Wenzday’s contract with the Cambridge Department of Public Works to regularly empty sidewalk recycling bins using pedal power. Their method is one of the most creative works of invention I've seen in quite a while, and the striking blue trailers used to tote the recyclables are as whimsical as something out of a Richard Scarry picture book while still — as the film shows — surprisingly utilitarian.

The visually-powerful scene in which a Metro Pedal Power driver drops off the refuse at a processing facility is one of the best in the film. It portrays Wenzday's crew as a small speck of dust in a much larger landfill, towered over by hulking, mammoth-like trucks eerily reminiscent of those in Jean Merrill's The Pushcart War (a childhood favorite).* This is not a bad metaphor for her business itself (as a small spoke in a much, much larger wheel) or, I dare say, for this fledgling type of dazzlingly active and innovation-based activism.

The movie was directed by Bob Nesson, a local filmmaker and activist who teaches at Emerson College in Boston. I had the pleasure of sitting in on a couple of Prof. Nesson’s classes about a year ago at Emerson in which he presented his students with topically diverse guest speakers as they prepared a documentary film about Greater Boston’s Mystic River. (Nesson was also part of the team behind The Work of 1,000,a provocative film about Marion Stoddart’s work to clean up the Nashua River of Central Massachusetts and Southern New Hampshire. Ms. Stoddart, who I have also had the privilege to meet, was at Power to the Pedals’s premiere as well.)

But why and how did I find myself in such a confluence of connections?

Mainly through my mother. She currently works for the Massachusetts Department of Environmental Protection, and previously worked in the State’s Riverways Program. In fact, she had been one of the guest speakers in Prof. Nesson’s class.

I have gone to so many environmental events since I was an infant and have been so fortunate in my ability to develop many great connections as a result. It has certainly helped me further myself as a journalist — I was able to write some articles for The Boston Globe’s former Environmental Reporter, Beth Daley, after meeting her at a meeting of the Neponset River Watershed Association. But it also helped me grow as a citizen of the world. These connections are important because they allow me to form a social conscience and be somewhat active in the world.

Many high school students’ only connection with social activism and the non-profit organization is through highly structured school events and more general charity work. Surely these are very important (in the vein of donating money, walking for a cause, or volunteering one’s time at a shelter, food bank, or soup kitchen), and they are all important ways students can show support for their communities. But they are not activist, in any sense of the word.

It is in the issues where we disagree that a teenager can find activism and a social conscience. Therein lies the conflict, and that’s where an informed teenager can take an appropriately nuanced but nonetheless steadfast side. It is also in these more contested issues that we find the more voiceless, for whom it is usually a noble cause to speak. No matter that we are students, anyone can find these issues in every avenue of life; they are all around us.

Find Activism and a Social Conscience

For me, it is the environment. This is not to say that I am an activist — not at all; but I have views, they are my own, and I know exactly why I have them. I also know that my views are not the same as everyone else's. Not everyone worldwide believes that urban bicycle delivery is a progressive step we should all move toward. Not everyone believes that public transportation is an invaluable ‘silver bullet’ that can cure environmental illness, economic stagnation, and social immobility. Most hotly debated today, not everyone agrees that we must make marked changes on a grand scale to stem the encroaching tide of Global Climate Change. Not everyone even believes that Climate Change is scientific fact.

And because of our nation’s most high ideals of free speech, press, and expression, that is perfectly fine.

But we Americans — who have such wonderful, valuable rights to these freedoms — do our forebears a great misdeed when we remain silent. I’m not saying everybody has to speak up about everything. But it is important that we all — teenagers included — develop social consciences through research and careful introspection. Even if we don't have a strong viewpoint on an issue, we ought to at least be knowledgeable about it!

In college, where activism is intensely present, this is even more important. A student needs to decide how they feel about the anti-Planned Parenthood protest on the quad. (This is something I saw on an actual campus visit that got me thinking.) What about a student club’s environmental initiative? These are all questions any competent, socially active high school or college student ought to be able to answer — or at least begin to answer.

So go do some research on a topic. Go see films like Power to the Pedals and The Work of 1,000. Attend protests (even ones you might disagree with) to find out what the debate is about. For example, I visited Occupy Boston in its early days, both to cover the movement for my school newspaper and to see what it was all about. Now do I want the end of capitalism and banks as we know it? No, certainly not. But when one of the bandana-mask-wearing Occupiers told me he was there "to assist in the revolution" (seriously; I've got it on tape), I was glad I heard his views, and I most surely though about them! For that reason, when it comes time to watch or read the news, look at sources from both sides of the issue if you can find them.

We are a very activist culture — and we always have been. From the Pilgrims leaving their native land to the revolutionary colonists throwing off the yoke of British oppression. From the federalists to the states’ rights activists. From the abolitionists to the founders of the Texas Republic. From the baby boom to the sexual revolution to the anti-Vietnam war protests to Generation X to today. Through the women’s rights movement, the African-American Civil Rights movement, and the LGBT rights movement — all three still ongoing — we are a nation of rebels.

And students that remain silent on issues because they can’t be bothered to develop a social conscience are simply being left behind, doing a great disservice to themselves, to their community, and to the world itself.

* The Pushcart War is, the more I think about it, a wonderful book about social conscience. If you want a road map to activism that won't immediately ask for your action, I recommend reading it. It's an illustrated kids' book, so it shouldn't be too difficult.