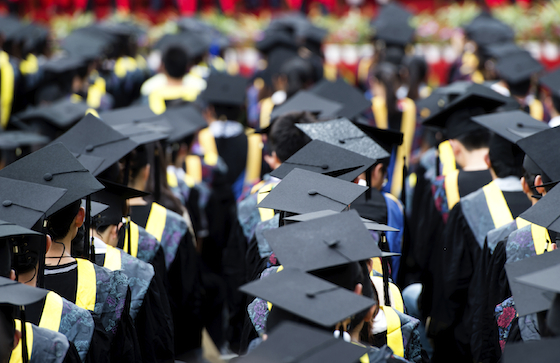 Most students expect to attend college, attain a degree, and find a job after graduation. Colleges promise jobs after graduation as part of their recruitment of candidates for admission. But more often than not, it’s not the case. Students graduate with massive amounts of debt and no job prospects. Where is the disconnect?

Heald College in San Francisco was fined last week by the Department of Education. According to Business Insider, they misrepresented the kinds of jobs its graduates could get:

The Department of Education (DOE) notified Heald College San Francisco on Tuesday that it would be fined $29,665,000 for misrepresenting the kinds of jobs its graduates could get to the DOE. In one striking example, Heald — which is part of the beleaguered Corinthian Colleges Inc. — allegedly counted an accounting major as employed in her field when she only had a job at Taco Bell. The letter details specific ways Heald allegedly misrepresented job placement figures including the omission of essential information about methodology for calculating placement rates and paying temp agencies to employ its grads in unsustainable jobs.

There were 947 misrepresented job placement rates to prospective and current students in the system. The college exaggerated the employment prospects for its graduates causing current and prospective students to rely upon such information as they decide whether or not to attend the school.

The students, who graduated between 2006 and 2010, did not end up securing the employment the statistics suggested they could expect. Instead, they ended up in low-paying fields. Had the graduates known their true, dismal employment prospects, they said, they would not have attended Cooley -- which has the lowest admissions standards of any accredited law school in the country, according to the U.S. News & World Report.

They argued, that the graduation percentage was false because it included “any type of employment”, including jobs that had absolutely nothing to do with the legal industry.

Students Fall Prey to the Misinformation

“This should be a wake-up call for consumers across the country about the abuses that can exist within the college sector,” said Education Secretary Arne Duncan. Students should be wary of claims of jobs after graduation. No college can guarantee a job; they can however skew the figures when reporting their graduate statistics.

Students should do more than rely on job prospect statistics. You should begin your job search strategy your first day on campus. Take advantage of all networking opportunities with alumnae and begin researching companies that hire graduates in your field and apply to internships with those companies. It’s your responsibility to plan for the future.

The value of internships in college is obvious. In an increasingly competitive job market, impressive classroom work, glowing professor recommendations or an impressive grade point average can no longer be counted on to guarantee college graduates a jump start in their desired career field. Instead, job applicants are expected to have professional experience under their belts before hitting the job market.