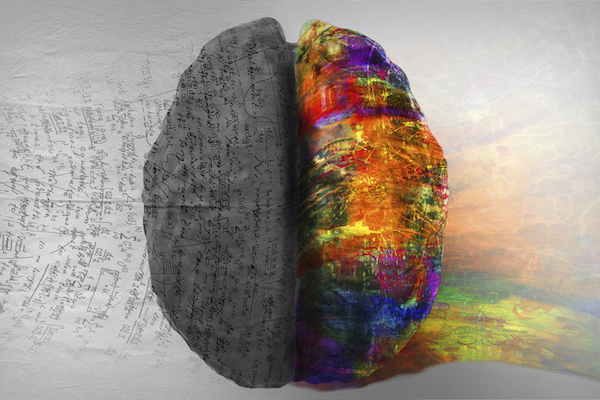 You’ve probably had moments when you could use a boost of creativity, such as when that college essay prompt is staring you in the face and your keyboard seems to be frozen.

But there are things you can do to give yourself a creative jumpstart and help you buckle down on a college application or even solve an everyday problem.

Creativity is often associated with artistic aptitude. However that is only part of the story. You can be creative in all kinds of situations: sports, school, social situations and business (although creative accounting is discouraged and is actually illegal in some places).

A broader definition of creativity is the ability to make connections across diverse and disparate fields.

How the brain works

However, for efficiency’s sake, the brain always tries to go for shortcuts. For example, the frontal lobe tries to offer the information that is most relevant to the query and keep it succinct. For example, if I were to say “apple,” most people would probably think of a piece of fruit – the most relevant and succinct thought response. However you could also think of Apple Computer, apple strudel, apple martini, apples and pears, stairs, apple pie, American Pie.... To have all those thoughts served up to you would be exhausting and inefficient.

The brain also efficiently sorts, stores and organizes information. There is an area for language, for color, music etc. The barriers that separate compartments are different between people. For some people these barriers are very high and difficult to permeate, while others find it easy to bleed concepts into each other.

Creative people do two things well: They have their frontal lobe serve up many different thoughts and ideas and they find it very easy to form connections between two different subjects.

You can learn creativity.

Can you alter your brain to do more of those two things? Studies by neuropsychologists suggest you can. They show you can improve creativity by cognitive stimulation because the brain has neuroplasticity, the ability to reorganize or change. It just requires repeating or forcing associations to develop neural connections.

There is much more to this, of course, but here are five simple tips that can help you be think more creatively when you hit a roadblock like how to write a college essay.

Pretend you are a famous person and imagine how he or she would tackle the problem. For example, what would Marilyn Monroe say about herself in her college essay, or how would Salvador Dali audition for that part in the school play?

A mind map is an arrangement of bubbles on paper with ideas in them. It allows you to think nonlinearly and to focus on the connections between concepts. It also allows you to pursue tangents and idea strains in depth.

Humor is often about surprise in the punchline. Try to fashion a punchline out of the current problem, to unlock new perspectives and insights.

4. Pose the problem as an open-ended question.

Asking questions allows people to zero in on the crux of a problem. Framing the problem as a combination of many different questions also makes us explore the different facets of the problem.

Aristotle, Wordsworth, Schopenhauer and Beethoven were all famous for taking long walks to gain inspiration. What we now know, following a 2014 study from Stanford University, is that walking makes you more creative. It relaxes the mind and allows connections to form more easily. And you get exercise to boot!

[Looking for more info from the TeenLife Experts? Here's 5 ways to keep motivated in high school!]