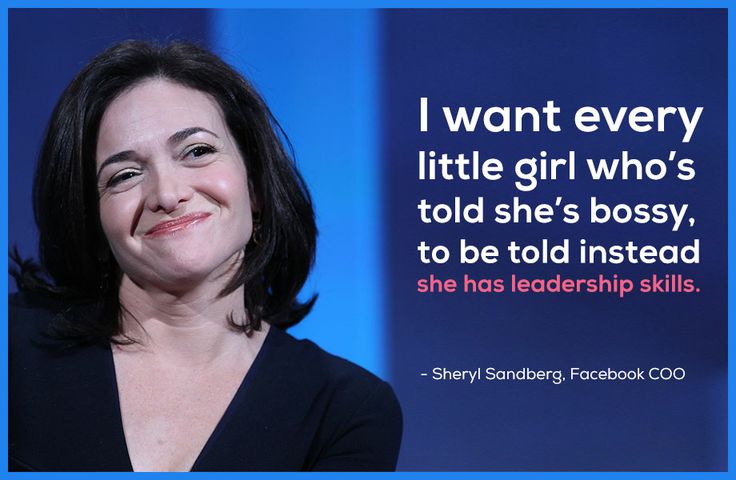 Could the severe underrepresentation of women in executive positions, leadership roles, and politics be explained by childhood name-calling? According to Sheryl Sandberg, COO of Facebook, the word “bossy,” is negatively affecting young girls and maiming women in leadership roles.

Sandberg launched the “Ban Bossy” campaign today to prevent name-calling in schools, as this stigmatized word affects girls throughout their adult lives. By middle school, she explains, “More boys than girls want to lead…[Girls] don’t want to be called bossy, and they don’t want to be disliked.”

Sandberg correlates the negative connotation of being called “bossy” with the feeling that women can’t be outspoken, powerful figures as adults. “We call girls bossy on the playground, we call them too aggressive or other B-words in the workplace,” she says, demonstrating the profound effects of name-calling at a young age.

Anna Maria Chávez, Girl Scouts USA CEO, has banned together with Sandberg and Condoleezza Rice on the campaign. Chávez asserts that calling girls “bossy” influences their decision to opt out of “building the right solutions in this country”—a country where men traditionally play larger leadership and executive roles.

Sheryl Sandberg herself was called "bossy" in high school, but she overcame the name-calling, despite the hurt it caused. Today, though, many young girls back down from leadership positions because of the fear that they will not be liked. By banning the word “bossy,” open-minded, strong, candid girls and teenagers will not be as stigmatized as they are now, and will hopefully embrace leadership positions.

In the end, banning “bossy” is more than just banning a word. Banning “bossy” will change how young girls think of themselves, as well as the perception of ambitious adult women. Sandberg concludes, “We’re talking about getting rid of the negative messages that hold our daughters back.”