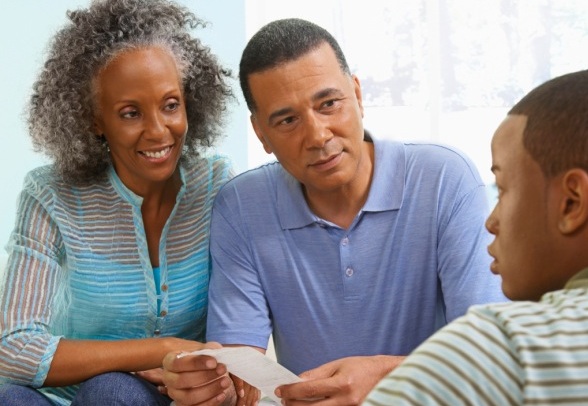 It’s no surprise. Colleges and universities view today’s breed of college parent with some disdain. They see us as interfering in our student’s lives and overly involved in the college admissions process. If you compare us to the parents of 20 years ago, you might draw the same conclusion.

We all have experience with out of control parents. They show up at their kids sport events and yell at the coaches and the umpires. They show up in the education system bullying teachers, coaches, administrators and other parents. Their kids rarely have consequences and cannot fend for themselves in most instances. They have a strong sense of entitlement that is passed down to their kids. Nobody likes them and nobody wants to be them.

What happens when parents are out of control?

When parents are out of control kids suffer. Not only are they embarrassed, but they are robbed of the chance to learn life skills and the thrill of doing something on their own. They don’t learn to self-advocate and they don’t get the experience of being independent.

In Early Admissions, a novel based on Lacy Crawford’s experience in a college admissions office, the author relates a story:

There’s a father who rewrites his son’s Common Application essay after his son has been rejected early decision by his first-choice school. In the revision, the father argues—in the first person, ventriloquizing the boy—that communities benefit from a range of people, the superstars and the average alike, and that the student should be admitted to the other schools on his list not because he is stellar but because he is not. This happened. On the night in question, the father summoned me to proofread his new essay before ensuring that his son submitted it. It broke the boy’s heart, and it broke mine. (I did not oversee submission of that essay. I told the student how I felt, and left it in his hands to decide what to do.)

This is just an example of the many stories I have heard from admissions officers about overly involved parents. College admissions officers all have stories to tell. If you were to hear them all, you wouldn’t believe them. Or would you? Do you sometimes think you fall into that parental demographic?

How do you help without harming?

We all have a little “rescuer” in us, after all. We start from the time they are born protecting them, caring for them, fighting battles for them, and most importantly, loving them. Just because they grow to be adults we don’t stop parenting. Most parents get it. Sometimes, however, we rush in before our kids have the chance to be adults.

The next time you feel like losing control and rescuing your kids, take a deep breath and think about the future. Will you be robbing them of the satisfaction of accomplishment? Will you be robbing them of learning that for every action there are consequences? Sometimes tough love is the best love of all. Here are a few tips to help you when you feel yourself taking control:

1. Teach them to self-advocate

One of the greatest tools a young adult can have is the ability to self-advocate. For years you have been fighting their battles for them. When they reach high school and move on to college, it’s time for them to learn how to do it for themselves. It may be hard to stand by silently and watch your teen get hurt or struggle with relationships (both with other teens and adults); but if you don’t step back, your college-bound teen will never be able to stand on their own two feet.

Listening is the hardest thing for a parent to do. We want to fix things because that’s what parents do. But sometimes things don’t need to be fixed. Sometimes our kids need to learn that life will bring conflict, disappointment and discouragement. They will learn this if you don’t jump in and fix every problem instantly. In college they will need to fix their own problems. Start letting them do this in high school.

Start early in high school and increase their freedom just a little at a time. As they exhibit responsibility and trustworthiness, allow them more freedom. By the time they leave for college they should be able to make decisions based on what is best for them simply because you allowed them to do it high school and fail at times.

You know the old adage, “If you love someone, set them free.” Parents never want to set their children free. We say we do. We try to do it. But deep down, when that little baby turns into a young adult it becomes harder and harder to let go. Parents who don’t let go have to deal with the repercussions later. This holding on has produced a generation of boomerang children—children who return home after college because they can’t succeed as independent adults.

Is it all bad?

Unfortunately, a few bad apples spoil the bunch for the rest of us. Educators see parents coming and immediately they put their helicopter radar up. But it’s not all bad.

Good parenting means involvement and participation in your kid’s lives, but when does it become more than that. In her book Early Admissions, Crawford asks some tough questions and points out some difficult truths:

Where do we draw the line? When does support become manipulation? When does tutoring stop helping a child, and start teaching him that on his own he’s not good enough? How can we come to realize that character—resilience, curiosity, dedication, a moral compass—is the prize here, and value that over the name on the diploma? Over time, I think, parents know this. But in the heat of senior fall, when everyone is feeling crazy, perspective can become clouded.

It’s no surprise that parents have become so involved in their kids’ lives that school administrators have begun to label us: helicopter parent, snow plow parent, and bulldozer parent. But it can’t all be bad; after all, parents are actually involved. Is this a bad thing? As with anything there are extremes. And it’s possible that a few bad parenting experiences have shed a negative light on all of us.

Let’s take a look at the benefits of a healthy dose of helicopter parenting:

1. Parents who are involved tend to have academically successful students.

Studies show kids who have parents that stay involved from Kindergarten to 12th grade are more likely to excel academically. Why? Involved parents help students with studies, organization and make sure they do their assignments. They also stay on top of grades and can recognize any problems that may require extra help.

2. Parents who are involved have students who are less likely to participate in at-risk behaviors.

Students whose parents are involved in their lives are going to find it harder to participate in at-risk behaviors. Why? Parents who know their kid’s friends, encourage activities at home, and encourage their kids to participate in after school activities help the kids learn responsibility and commitment. They have little time to get into trouble.

3. Parents who are invested financially and encourage their students to invest financially have students who take their education seriously.

College is a large financial commitment. When parents commit to invest, and insist that their student invest, the student will be more likely to see the value of that investment. That translates into academic success and a successful college education.

In The Student Affairs Feature, “It's Time to Change our Views on Parental Involvement”, Beth Moriarty, sums it up like this:

It’s a fact that some parents do get overly involved in their student’s life. But saying that all parents are helicopter parents is wrong. Our roles as parents have changed and evolved over the years. Today’s parents are invested in their student’s educational future and success . . . Should parents be embraced as partners and should the colleges help parents embrace that role?

My mother used to say, “Don’t throw out the baby with the bathwater.” I think that is the best way to look at helicopter parenting. Embrace the good things about this type of parenting and avoid the behaviors that cause educators to label us.

For those parents who are waving goodbye to their teens in the fall, you’ve a short time to give them a crash course in independence. And you should use that time to examine your parenting skills and determine whether you are hovering or helping.