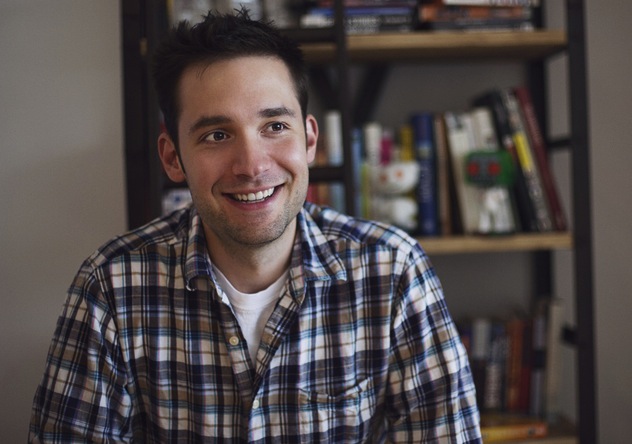 The world in 2014 would not be the same without the Internet. Without science, technology, engineering and mathematics (STEM), the tool that we all use daily would have never been created.

The ability to share information is what makes the Internet so revolutionary. Over the past two decades or so, Internet users have gained access and credibility, and are able to write, post, and share almost anything online. The Internet today is more like a “democracy” for users than ever before. Alexis Ohanian, nicknamed “The Mayor of the Internet,” played a huge role in forming this democracy.

Ohanian is the co-founder of one of the most popular social news websites, reddit.com. In a TED Talk (a short speech about Technology, Entertainment, and Design), Alexis described reddit as the “Democratic front page of the best stuff on the web.”

With more than 21.5 million unique monthly visitors and growing, readers can contribute and vote stories up or down, which then ranks them by popularity on the front page of reddit every day. Alexis believes Internet users should have a voice in what content is available on the web, and has made every effort possible to keep this freedom intact. In Alexis’ own words, “The Internet provides a level playing field.”

It comes as no surprise that Ohanian is a firm believer in the importance STEM education. The growth of the Internet, after all, is directly affected by the expansion of technology and the increasing knowledge of STEM in young children and teenagers. Alexis explains his role in the STEM movement, and advises the future generation of STEM minds.

Sophie: You founded reddit right after you graduated college. What sparked the idea in the first place?

Alexis: While attending the University of Virginia, Steve Huffman (my cofounder) and I started a mobile phone software company, but it was 2005, and it failed to receive investor funding. We scrapped our original idea and developed something we could build in a browser that solved our problem every morning—what’s new and interesting online.

What got us excited about entrepreneurship was a book called Masters of Doom and a talk by Paul Graham we heard during our senior year spring break: How to Start a Startup. Intent on spreading the idea of Internet entrepreneurship far and wide, I wrote my book Without Their Permission. I went on a speaking tour to over 77 universities to inspire students with an idea and a Wi-Fi signal!

S: Was STEM a big part of your teen years? Did you take any high school classes that stood out and still influence you today?

A: Yes! I was lucky because my parents bought me a computer in middle school and gave me free reign, as well as an Internet connection, which was unbelievably slow compared to today. I also lucked out because my high school (Howard High) had just started an independent study class called “MST Research” (Math, Science, Technology Research) that I was recommended for and took every semester thereafter. It changed my life.

S: You studied history and commerce in college. But you also know how to code and build websites. As the wave of the future, do you think students should major in STEM fields, or do you believe anyone can teach themselves STEM skills?

A: I’ve been going all over the country encouraging people to start learning how to code. You don’t need to wait to enroll in a class at school. Codecademy.com and MakeGamesWithUs.com are two of my favorites; I love them so much I invested in them. While I did pick up certain skills through high school and community college classes, I mostly taught myself. However, I stopped when I started working with Steve because he was a far better developer. Way better. He’s the one who wrote all of reddit’s code. I took care of all things non-technical. But if I could do it all again, I’d have kept programming all these years.

S: The Obama administration is pushing the Department of Education in a STEM-focused direction. Although you’ve had some discrepancies with Congress regarding the Stop Online Piracy Act and the Senate’s Protect IP Act, do you believe the government is heading in the right direction? If not, what should schools be focusing on?

A: STEM-focused education is going to be vital for this generation to compete in the new economy. Education is a huge challenge and STEM will have to be a pillar if we’re going to keep leading the world. To quote Marc Andreessen, an investor, software engineer, and
co-author of Mosaic, “Software is eating the world.”

S: Should high schools teach coding to all students? Should this become a required subject, like math or history?

A: Yes, I believe so. It’s a skill that’s got insatiable demand, not only right now, but everything that turns on will eventually have code. It’s the new literacy. Essentially
a must.

S: On an ABC This Week quiz, you say the keys to success are “Perseverance, luck and the Internet.” Why is the Internet so instrumental in success?

A: Where else could two nobodies fresh out of college with no connections, $12K, and some computers in Medford, MA, create a site that, in less than a decade, has more traffic than the New York Times, CNN, etc.? That story simply cannot happen in meatspace (the
opposite of cyberspace).

S: You have been deemed “The Mayor of the Internet.” As “Mayor,” what do you believe your responsibilities are? How can you make the Internet better, and how can you keep it that way?

A: That was a generous Forbes headline. I’m just doing my part to help keep the Internet open and awesome for as long as possible. A bunch of us drafted the Declaration of Internet Freedom that I hope we can uphold. There’s always more work to do, but I’ve told my friends at Electronic Frontier Foundation and Fight for the Future (great organizations on the front lines of this) that they have my axe!

S: What is the most important thing you’ve learned since you founded reddit and have gained celebrity status in the grassroots community?

A: Make something people want. Online, that’s all that matters.

S: In general, what are your suggestions for future generations to succeed?

A: We are all growing up with technology, which gives us a fundamental fluency that previous generations do not have. Future generations should take advantage of this and create the amazing things going forward. But let’s make sure every single one of us has Internet access and obtains the skills necessary to make the most out of every opportunity so we can maximize all of the great ideas we’ll see come to fruition!