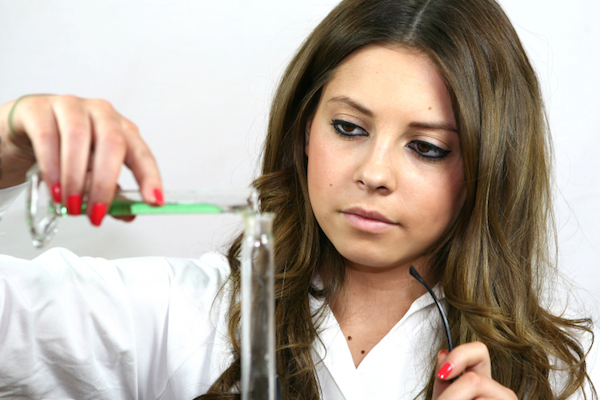 Use your phone and your Sherlock Holmes sleuthing skills to solve a mystery, enter a contest for a $10,000 scholarship, and help a classroom spread the message of STEM.

Why’s everyone so worried about science, technology, engineering, and math?

For starters, STEM occupations are projected to grow by 17 percent from 2008 to 2018, compared to 9.8 percent growth for non-STEM, according to the U.S. government. But it turns out gender has lot to do with who might be filling those jobs.

When the National Science Foundation asked fourth-graders in 2007 if they liked science and math, 68 percent of the boys and 66 percent of the girls said “yes.”

That seems OK. But then consider what happens:

When the NSF asked second-graders to draw a scientist, most drew a white male in a lab coat. Any woman scientist looked “severe and not very happy.” And that stereotype appears to turn girls off so that by eighth grade, more than twice as many boys as girls say they are interested in STEM careers.

The good news: Girls can be turned on to science through games, role models, and hands-on experiments, the NSF says. And, when classroom teachers do more things to engage girls in STEM, boys were more interested as well.

Now you can be a Science Sleuth by playing a fun mystery game on your phone developed by 3M Scientists and DoSomething.org that will help unlock STEM funding from 3M for classrooms through DonorsChoose.org. And, you’ll be entered to win a $10,000 scholarship for solving the mystery.

Here’s how it works:

So it’s a win for STEM all around: You have some fun, help other kids, possibly get $10,000 for college, and unleash your inner scientist!